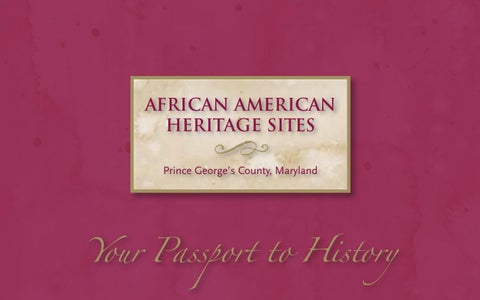 Your Passport to History

Your Passport to History

To learn more about the African American sites and communities referred to in this Passport, please contact M-NCPPCâ&#x20AC;&#x2122;s Black History Program located in Abraham Hall at 240-264-3415.

iscover over 300 years of history in a visual D journey of African American historic sites that are open to the public. Discover the richness and diversity that Prince George’s County has to offer. This Passport will give you what you need to get started on your trip through history. Challenge yourself! See if you can answer the questions at the bottom of each page after you have visited each site. Check your answers by

visiting blackhistory.pgparks.com. There is so much to discover about African American history in Prince George’s County!

Poplar Hill on His Lordship’s Kindness

ABRAHAM HALL 7612 Old Muirkirk Road, Beltsville, MD 20705 Office hours: Monday–Friday, 9 am – 5 pm 240-264-3415 / blackhistory@pgparks.com uilt in 1889 for the Benevolent Sons and B Daughters of Abraham, Abraham Hall is the county’s most outstanding example of a late 1800s African American benevolent society lodge. Over the years, it has also served the African American community of Rossville/Muirkirk as a temporary schoolhouse as well as a Methodist Church. Abraham Hall is home to The Maryland-National Capital Park and Planning Commission’s Black History Program.

What was a benevolent society?

BELAIR MANSION 12207 Tulip Grove Drive, Bowie, MD 20715 Tours: Tuesday – Sunday, noon – 4 pm, Groups by appointment 301-809-3089 / cityofbowie.org/museum uilt in 1745 for Provincial Governor Samuel Ogle, B Belair, like most Chesapeake plantations, depended on the labor of enslaved Africans. A permanent exhibit, “Put to Work in Making Tobacco,” interprets the contrasting lives of the gentry and the slave Who was Andrew Jackson of Belair?

population who called Belair home. An exhibit at the Belair Stables honors the significant role of African American jockeys in the 1800s and 1900s.

This 70-acre park was once home to two local African American sandlot baseball teams, the

How many fields were located at the Park?

with slabs of local ironstone and plants. African American families, including the Adams, Becketts and Plummers, buried their loved ones at Cherry Hill through the 1940s.

COLUMBIA AIR CENTER 16000 Croom Airport Road, Upper Marlboro, MD 20772 Self guided with signage, Daily, dawn to dusk 301-627-6074 / history.pgparks.com he first African American owned and operated Tairfield in Maryland, if not the nation, was licensed in 1941. John W. Greene, Jr., a pioneer in black aviation, was instrumental in developing the airfield originally called Riverside Field. Occupied by the U.S. Navy

Pilots at the Columbia Air Center

What was the name of the first Civil Air Patrol Squadron?

DORSEY CHAPEL 10704 Brookland Road, Glenn Dale, MD 20769 Weekday tours by appointment 301-352-5544 / history.pgparks.com orsey Chapel is a restored, small frame, meeting D house-style church that was the focal point of the African American farming community of Brookland at the turn of the 20th century. The community raised money and purchased the property to establish a place What church joined with Dorsey Chapel in the 1970s?

of worship for a Methodist Episcopal Church. The chapel was dedicated in 1900 and was in continuous use until 1971 when it merged with another chapel to form the Glenn Dale United Methodist Church.

HOLY FAMILY CATHOLIC CHURCH 12010 Woodmore Road, Mitchellville, MD 20721 301-249-2266 uilt in 1890, Holy Family Church served the B African American Catholic community of rural Woodmoreâ&#x20AC;&#x201C;Mitchellville. The land for the church was deeded to the congregation by Isaac Wood, a white carpenter who recognized the need for a local Catholic mission for the communityâ&#x20AC;&#x2122;s African American families. The parishioners, primarily black tenant farmers, built the structure which now serves both African American and white families.

What year did Wood deed the land for the church?

The site interprets the archaeology and history of American Indians, the colonial town of Charles

Town (the county’s first seat of government) and the African American heritage of Mount Calvert. By the mid-1800s, more than 50 slaves lived and What is the name of the exhibit at the site?

worked at the Mount Calvert Plantation. Exhibit panels and public archaeology tours interpret the African American heritage of the site.

his historic site features the reconstructed Tfoundations of two slave quarters, one brick and one of wood, from the former Northampton Plantation (1673â&#x20AC;&#x201C;1865). By 1840 there were over

100 enslaved African Americans at Northampton. Archaeological excavations have recovered tens of thousands of artifacts and considerable information about the lives of slaves and tenant farmers who lived here from the 1700s through the mid-1900s.

Which foundation is older â&#x20AC;&#x201D; the wood framed structure or brick quarter?

Poplar Hill was a part of a 7,000 acre land grant from Charles Calvert to Colonel Henry Darnall in 1703. The

mansion was built between 1785 and 1787 by Darnallâ&#x20AC;&#x2122;s great grandson, Robert Darnall, replacing an earlier residence constructed for his father, Henry Darnall III. What special designation does this site have?

The site interprets the history of enslaved African Americans who worked the plantation and their families that remained in the area after emancipation.

church was a small log chapel built Tin he1868original and included a cemetery that was already being used by African Americans in the Muirkirk area. The chapel was later destroyed by fire and replaced by a new chapel in 1901. In the 1950s a new brick church was built across the road and the earlier building was demolished. The original chapel site hosts the churchâ&#x20AC;&#x2122;s cemetery which dates back to the 1880s.

What is the date of the oldest gravestone in the cemetery?

Ridgely Church was constructed in Tthehelateoriginal 1870s on land deeded to Lewis Ridgely and two other African American trustees. The Church was destroyed by fire in 1921 and rebuilt. It is named in honor of Lewis Ridgely and includes a small cemetery Why was the church moved?

adjacent to the building with primitively carved stones. In the late 1980s the church was moved a short distance and renovated. It reopened in 1990. * Spelling of Ridgely varies

Ridgeley* School opened in 1927 as Colored School No.1 in Election District 13 and was

How many Rosenwald Schools were built in Prince George’s County?

highlights information from his 1841 diary, provides a rare, personal account of life as a slave on the

Who was George Calvert’s grandfather?

Riversdale plantation. An exhibit in the Visitor Center on Plummer and his family focuses on their role in the community after emancipation.

ST. MARKâ&#x20AC;&#x2122;S UNITED METHODIST CHURCH 601 8th Street, Laurel, MD 20707 301-776-8885 dates back to 1891 when James Hebron Sandt. Markâ&#x20AC;&#x2122;s two other black Methodists purchased the land for a new church. They had been worshiping in a building owned by Hebron which they then moved to this site. A new church was constructed in 1921 and Hebron Hall was moved and converted into a social hall. The church was expanded during the 1940s and represents the religious center of a longstanding African American community.

What school was across the street from Hebron Hall?

S t. Paul is thought to be the oldest black congrega-

tion in the county. In 1867, the congregation acquired land and by 1888 had built a Methodist meetinghouse. They may have been affiliated with an even earlier group of freed blacks who had built their

Where did the St. Paul congregation worship before building their own church?

own meetinghouse in the Oxon Hill area in the late 1700s. A new sanctuary was constructed in 1915 and was later expanded to form the present day church complex.

The Duckett Cabin is a rare chestnut log tenant farmhouse from the 1880s. It was likely built by

Charles Duckett, a former slave and landsman in the Union Navy during the Civil War. The cabin is part of the Patuxent Rural Life Museums complex, which includes the Duvall Tool Museum, a tobacco museum, a blacksmith shop and an early 20th century Sears, Roebuck & Company Simplex house.

Where was the cabin located before it was moved to Patuxent River Park in 1974?

Our staff has access to an interpretation service and can help in over 150 languages. Please ask for assistance when you call or visit us. The Department of Parks and Recreation encourages and supports the participation of individuals with disabilities. Register at least a minimum of two weeks in advance of the program start date to request and receive a disability accommodation. PPC,PR,NHRD,ACHD,BHP 2019