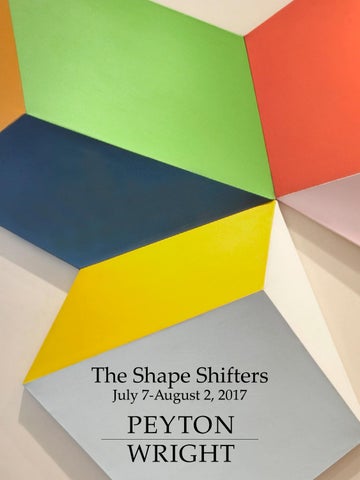 he concept of the painting as a discrete view into an illusory threedimensional space is nearly as old as painting itself. Since the advent of easel painting the employment of standard shapesâ&#x20AC;&#x201D; rectangles and squaresâ&#x20AC;&#x201D;served to reinforce the perception of a window or portal into a reality beyond that of the object itself. Paintings that deviated from the traditional rectangular and square formats have been around since the Renaissance when arched and round pictures (tondos) became popular, but such variations in form were not intended to affect the conceptual basis of the work. By the early 20th century modernist painters such as Piet Mondrian had begun to experiment with forms other than the standard 90-degree angle configurations. In the post-War years young artists such as the Italian Lucio Fontana, the English artist Richard Smith, and American painters such as Ellsworth Kelly, Leon Polk Smith, Kenneth Noland, Robert Mangold, Richard Tuttle and Frank Stella started to explore the possibilities of irregularly shaped supports for their abstractions. Their insistence on the painting as a singular two-dimensional object rejected any suggestion of pictorial illusion and the subliminal relation of traditional pictorial formats to landscape (the horizontal rectangle) and portraiture (the vertical rectangle). By 1964, the movement had gained sufficient currency for the Guggenheim Museum in New York to present the exhibition The Shaped Canvas, curated by Lawrence Alloway. This exhibiiton examines the approach of painters to the continuing dialogue between color, form, dimensionality and the relation of viewer and artwork. The Shape Shifters brings together numerous important movements in abstract post-War art including Abstract Expressionism, hard-edge painting, Minimalism, color-field painting and op art. The shaped canvas movement remains influential into the 21st century and its practitioners continue to explore the expressive possibilities of color, dimension and form freed from the restrictions of the right-angle canvas. An exhibition of work outside the rectangle

An exhibition of work outside the rectangle