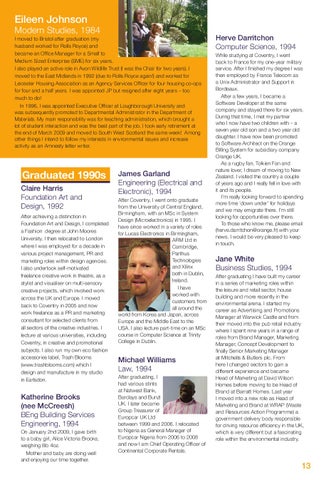 Modern Studies, 1984 I moved to Bristol after graduation (my husband worked for Rolls Royce) and became an Office Manager for a Small to Medium Sized Enterprise (SME) for six years. I also played an active role in Avon Wildlife Trust (I was the Chair for two years). I moved to the East Midlands in 1992 (due to Rolls Royce again!) and worked for Leicester Housing Association as an Agency Services Officer for four housing co-ops for four and a half years. I was appointed JP but resigned after eight years – too much to do! In 1996, I was appointed Executive Officer at Loughborough University and was subsequently promoted to Departmental Administrator in the Department of Materials. My main responsibility was for teaching administration, which brought a lot of student interaction and was the best part of the job. I took early retirement at the end of March 2009 and moved to South West Scotland the same week! Among other things I intend to follow my interests in environmental issues and increase activity as an Amnesty letter writer.

Graduated 1990s Claire Harris Foundation Art and Design, 1992 After achieving a distinction in Foundation Art and Design, I completed a Fashion degree at John Moores University. I then relocated to London where I was employed for a decade in various project management, PR and marketing roles within design agencies. I also undertook self-motivated freelance creative work in theatre, as a stylist and visualiser on multi-sensory creative projects, which involved work across the UK and Europe. I moved back to Coventry in 2005 and now work freelance as a PR and marketing consultant for selected clients from all sectors of the creative industries. I lecture at various universities, including Coventry, in creative and promotional subjects. I also run my own eco fashion accessories label, Trash Blooms (www.trashblooms.com) which I design and manufacture in my studio in Earlsdon.

James Garland Engineering (Electrical and Electronic), 1994 After Coventry, I went onto graduate from the University of Central England, Birmingham, with an MSc in System Design (Microelectronics) in 1995. I have since worked in a variety of roles for Lucas Electronics in Birmingham, ARM Ltd in Cambridge, Parthus Technologies and Xilinx both in Dublin, Ireland. I have worked with customers from all around the world from Korea and Japan, across Europe and the Middle East to the USA. I also lecture part-time on an MSc course in Computer Science at Trinity College in Dublin.

Michael Williams Law, 1994 After graduating, I had various stints at Natwest Bank, Barclays and Bunzl UK. I later became Group Treasurer of Europcar UK Ltd between 1999 and 2006. I relocated to Nigeria as General Manager of Europcar Nigeria from 2006 to 2008 and now I am Chief Operating Officer of Continental Corporate Rentals.

Herve Darritchon Computer Science, 1994 While studying at Coventry, I went back to France for my one-year military service. After I finished my degree I was then employed by France Telecom as a Unix Administrator and Support in Bordeaux. After a few years, I became a Software Developer at the same company and stayed there for six years. During that time, I met my partner who I now have two children with – a seven year old son and a two year old daughter. I have now been promoted to Software Architect on the Orange Billing System for subsidiary company Orange UK. As a rugby fan, Tolkien Fan and nature lover, I dream of moving to New Zealand. I visited the country a couple of years ago and I really fell in love with it and its people. I’m really looking forward to spending more time ‘down under’ for holidays and we may emigrate there. I’m still looking for opportunities over there. To those who know me, please email (herve.darritchon@orange.fr) with your news. I would be very pleased to keep in touch.

Jane White Business Studies, 1994 After graduating I have built my career in a series of marketing roles within the leisure and retail sector, house building and more recently in the environmental arena. I started my career as Advertising and Promotions Manager at Warwick Castle and from their moved into the pub retail industry where I spent nine years in a range of roles from Brand Manager, Marketing Manager, Concept Development to finally Senior Marketing Manager at Mitchells &amp; Butlers plc. From here I changed sectors to gain a different experience and became Head of Marketing at David Wilson Homes before moving to be Head of Brand at Barratt Homes. Last year I moved into a new role as Head of Marketing and Brand at WRAP (Waste and Resources Action Programme) a government delivery body responsible for driving resource efficiency in the UK, which is very different but a fascinating role within the environmental industry. 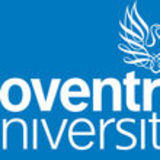