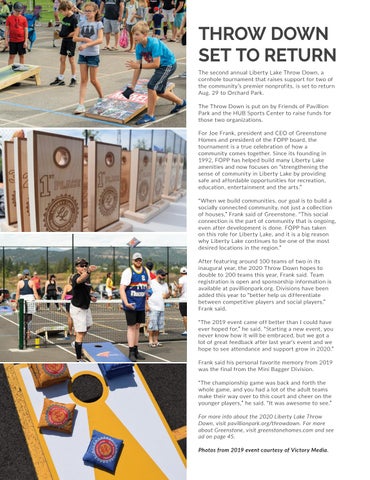 THROW DOWN SET TO RETURN The second annual Liberty Lake Throw Down, a cornhole tournament that raises support for two of the community’s premier nonprofits, is set to return Aug. 29 to Orchard Park. The Throw Down is put on by Friends of Pavillion Park and the HUB Sports Center to raise funds for those two organizations. For Joe Frank, president and CEO of Greenstone Homes and president of the FOPP board, the tournament is a true celebration of how a community comes together. Since its founding in 1992, FOPP has helped build many Liberty Lake amenities and now focuses on “strengthening the sense of community in Liberty Lake by providing safe and affordable opportunities for recreation, education, entertainment and the arts.” “When we build communities, our goal is to build a socially connected community, not just a collection of houses,” Frank said of Greenstone. “This social connection is the part of community that is ongoing, even after development is done. FOPP has taken on this role for Liberty Lake, and it is a big reason why Liberty Lake continues to be one of the most desired locations in the region.” After featuring around 100 teams of two in its inaugural year, the 2020 Throw Down hopes to double to 200 teams this year, Frank said. Team registration is open and sponsorship information is available at pavillionpark.org. Divisions have been added this year to “better help us differentiate between competitive players and social players,” Frank said. “The 2019 event came off better than I could have ever hoped for,” he said. “Starting a new event, you never know how it will be embraced, but we got a lot of great feedback after last year&#39;s event and we hope to see attendance and support grow in 2020.” Frank said his personal favorite memory from 2019 was the final from the Mini Bagger Division. “The championship game was back and forth the whole game, and you had a lot of the adult teams make their way over to this court and cheer on the younger players,” he said. “It was awesome to see.” For more info about the 2020 Liberty Lake Throw Down, visit pavillionpark.org/throwdown. For more about Greenstone, visit greenstonehomes.com and see ad on page 45. Photos from 2019 event courtesy of Victory Media. 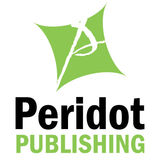