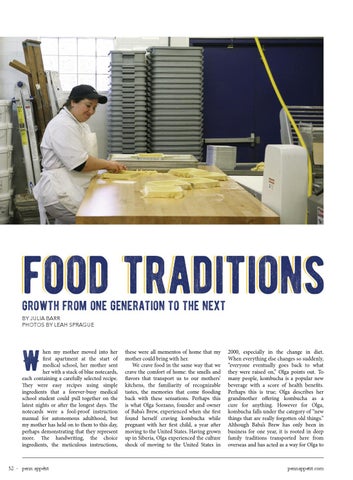 hen my mother moved into her first apartment at the start of medical school, her mother sent her with a stack of blue notecards, each containing a carefully selected recipe. They were easy recipes using simple ingredients that a forever-busy medical school student could pull together on the latest nights or after the longest days. The notecards were a fool-proof instruction manual for autonomous adulthood, but my mother has held on to them to this day, perhaps demonstrating that they represent more. The handwriting, the choice ingredients, the meticulous instructions,

these were all mementos of home that my mother could bring with her. We crave food in the same way that we crave the comfort of home: the smells and flavors that transport us to our mothers’ kitchens, the familiarity of recognizable tastes, the memories that come flooding back with these sensations. Perhaps this is what Olga Sorzano, founder and owner of Baba’s Brew, experienced when she first found herself craving kombucha while pregnant with her first child, a year after moving to the United States. Having grown up in Siberia, Olga experienced the culture shock of moving to the United States in

2000, especially in the change in diet. When everything else changes so suddenly, “everyone eventually goes back to what they were raised on,” Olga points out. To many people, kombucha is a popular new beverage with a score of health benefits. Perhaps this is true; Olga describes her grandmother offering kombucha as a cure for anything. However for Olga, kombucha falls under the category of “new things that are really forgotten old things.” Although Baba’s Brew has only been in business for one year, it is rooted in deep family traditions transported here from overseas and has acted as a way for Olga to 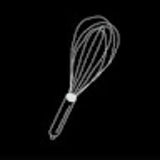