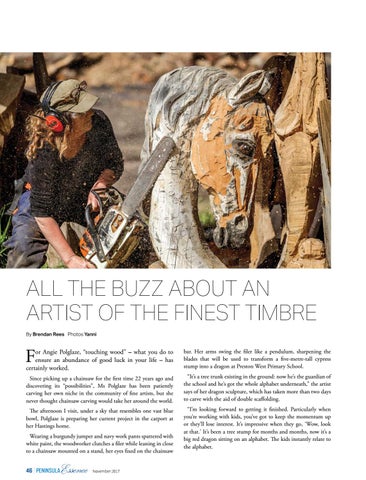 or Angie Polglaze, “touching wood” – what you do to ensure an abundance of good luck in your life – has certainly worked.

bar. Her arms swing the filer like a pendulum, sharpening the blades that will be used to transform a five-metre-tall cypress stump into a dragon at Preston West Primary School.

Since picking up a chainsaw for the first time 22 years ago and discovering its “possibilities”, Ms Polglaze has been patiently carving her own niche in the community of fine artists, but she never thought chainsaw carving would take her around the world.

“It’s a tree trunk existing in the ground: now he’s the guardian of the school and he’s got the whole alphabet underneath,” the artist says of her dragon sculpture, which has taken more than two days to carve with the aid of double scaffolding.

The afternoon I visit, under a sky that resembles one vast blue bowl, Polglaze is preparing her current project in the carport at her Hastings home.

“I’m looking forward to getting it finished. Particularly when you’re working with kids, you’ve got to keep the momentum up or they’ll lose interest. It’s impressive when they go, ‘Wow, look at that.’ It’s been a tree stump for months and months, now it’s a big red dragon sitting on an alphabet. The kids instantly relate to the alphabet.

Wearing a burgundy jumper and navy work pants spattered with white paint, the woodworker clutches a filer while leaning in close to a chainsaw mounted on a stand, her eyes fixed on the chainsaw