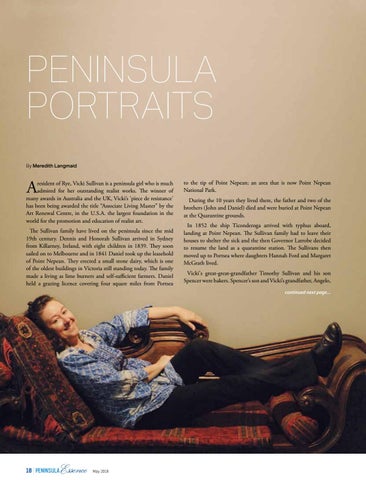 resident of Rye, Vicki Sullivan is a peninsula girl who is much admired for her outstanding realist works. The winner of many awards in Australia and the UK, Vicki’s 'piece de resistance' has been being awarded the title “Associate Living Master” by the Art Renewal Centre, in the U.S.A. the largest foundation in the world for the promotion and education of realist art. The Sullivan family have lived on the peninsula since the mid 19th century. Dennis and Honorah Sullivan arrived in Sydney from Killarney, Ireland, with eight children in 1839. They soon sailed on to Melbourne and in 1841 Daniel took up the leasehold of Point Nepean. They erected a small stone dairy, which is one of the oldest buildings in Victoria still standing today. The family made a living as lime burners and self-sufficient farmers. Daniel held a grazing licence covering four square miles from Portsea

to the tip of Point Nepean; an area that is now Point Nepean National Park. During the 10 years they lived there, the father and two of the brothers (John and Daniel) died and were buried at Point Nepean at the Quarantine grounds. In 1852 the ship Ticonderoga arrived with typhus aboard, landing at Point Nepean. The Sullivan family had to leave their houses to shelter the sick and the then Governor Latrobe decided to resume the land as a quarantine station. The Sullivans then moved up to Portsea where daughters Hannah Ford and Margaret McGrath lived. Vicki's great-great-grandfather Timothy Sullivan and his son Spencer were bakers. Spencer’s son and Vicki’s grandfather, Angelo, continued next page...