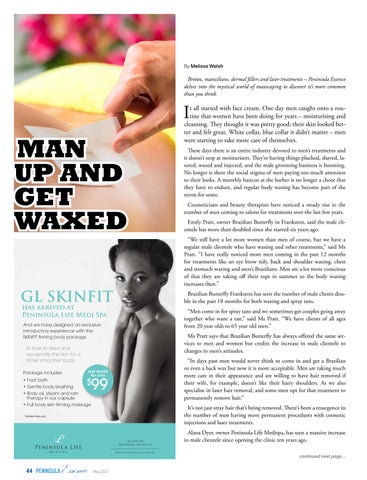 Its time to feed and rejuvenate the skin for a firmer smoother body Package includes: • Foot bath • Gentle body brushing

t all started with face cream. One day men caught onto a routine that women have been doing for years – moisturising and cleansing. They thought it was pretty good; their skin looked better and felt great. White collar, blue collar it didn’t matter – men were starting to take more care of themselves.

These days there is an entire industry devoted to men’s treatments and it doesn’t stop at moisturisers. They’re having things plucked, shaved, lasered, waxed and injected, and the male grooming business is booming. No longer is there the social stigma of men paying too much attention to their looks. A monthly haircut at the barber is no longer a chore that they have to endure, and regular body waxing has become part of the norm for some. Cosmeticians and beauty therapists have noticed a steady rise in the number of men coming to salons for treatments over the last few years. Emily Pratt, owner Brazilian Butterfly in Frankston, said the male clientele has more than doubled since she started six years ago. “We still have a lot more women than men of course, but we have a regular male clientele who have waxing and other treatments,” said Ms Pratt. “I have really noticed more men coming in the past 12 months for treatments like an eye brow tidy, back and shoulder waxing, chest and stomach waxing and men’s Brazilians. Men are a lot more conscious of that they are taking off their tops in summer so the body waxing increases then.” Brazilian Butterfly Frankston has seen the number of male clients double in the past 18 months for both waxing and spray tans. “Men come in for spray tans and we sometimes get couples going away together who want a tan,” said Ms Pratt. “We have clients of all ages from 20 year olds to 65 year old men.” Ms Pratt says that Brazilian Butterfly has always offered the same services to men and women but credits the increase in male clientele to changes in men’s attitudes. “In days past men would never think to come in and get a Brazilian or even a back wax but now it is more acceptable. Men are taking much more care in their appearance and are willing to have hair removed if their wife, for example, doesn’t like their hairy shoulders. As we also specialise in laser hair removal, and some men opt for that treatment to permanently remove hair.” It’s not just stray hair that’s being removed. There’s been a resurgence in the number of men having more permanent procedures with cosmetic injections and laser treatments.