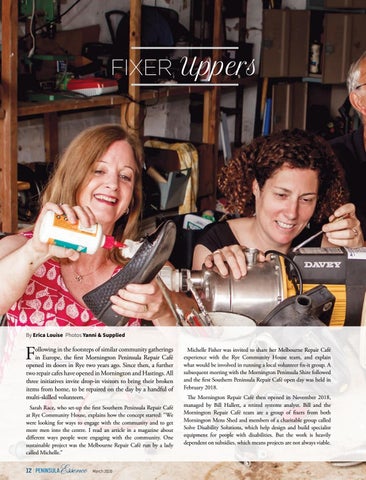 ollowing in the footsteps of similar community gatherings in Europe, the first Mornington Peninsula Repair Café opened its doors in Rye two years ago. Since then, a further two repair cafes have opened in Mornington and Hastings. All three initiatives invite drop-in visitors to bring their broken items from home, to be repaired on the day by a handful of multi-skilled volunteers.

Sarah Race, who set-up the first Southern Peninsula Repair Café at Rye Community House, explains how the concept started: “We were looking for ways to engage with the community and to get more men into the centre. I read an article in a magazine about different ways people were engaging with the community. One sustainable project was the Melbourne Repair Café run by a lady called Michelle.”

Michelle Fisher was invited to share her Melbourne Repair Café experience with the Rye Community House team, and explain what would be involved in running a local volunteer fix-it group. A subsequent meeting with the Mornington Peninsula Shire followed and the first Southern Peninsula Repair Café open day was held in February 2018. The Mornington Repair Café then opened in November 2018, managed by Bill Hallett, a retired systems analyst. Bill and the Mornington Repair Café team are a group of fixers from both Mornington Mens Shed and members of a charitable group called Solve Disability Solutions, which help design and build specialist equipment for people with disabilities. But the work is heavily dependent on subsidies, which means projects are not always viable.