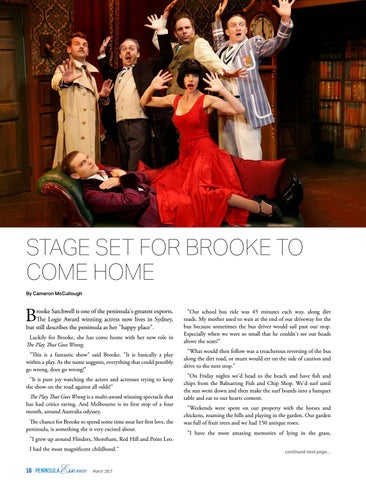 STAGE SET FOR BROOKE TO COME HOME By Cameron McCullough

rooke Satchwell is one of the peninsula&#39;s greatest exports. The Logie Award winning actress now lives in Sydney, but still describes the peninsula as her &quot;happy place&quot;. Luckily for Brooke, she has come home with her new role in The Play That Goes Wrong. &quot;This is a fantastic show&quot; said Brooke. &quot;It is basically a play within a play. As the name suggests, everything that could possibly go wrong, does go wrong!&quot; &quot;It is pure joy watching the actors and actresses trying to keep the show on the road against all odds!&quot; The Play That Goes Wrong is a multi-award winning spectacle that has had critics raving. And Melbourne is its first stop of a four month, around Australia odyssey. The chance for Brooke to spend some time near her first love, the peninsula, is something she is very excited about. &quot;I grew up around Flinders, Shoreham, Red Hill and Point Leo. I had the most magnificent childhood.&quot;

&quot;Our school bus ride was 45 minutes each way, along dirt roads. My mother used to wait at the end of our driveway for the bus because sometimes the bus driver would sail past our stop. Especially when we were so small that he couldn&#39;t see our heads above the seats!&quot; &quot;What would then follow was a treacherous reversing of the bus along the dirt road, or mum would err on the side of caution and drive to the next stop.&quot; &quot;On Friday nights we&#39;d head to the beach and have fish and chips from the Balnarring Fish and Chip Shop. We&#39;d surf until the sun went down and then make the surf boards into a banquet table and eat to our hearts content. &quot;Weekends were spent on our property with the horses and chickens, roaming the hills and playing in the garden. Our garden was full of fruit trees and we had 150 antique roses. &quot;I have the most amazing memories of lying in the grass, continued next page...