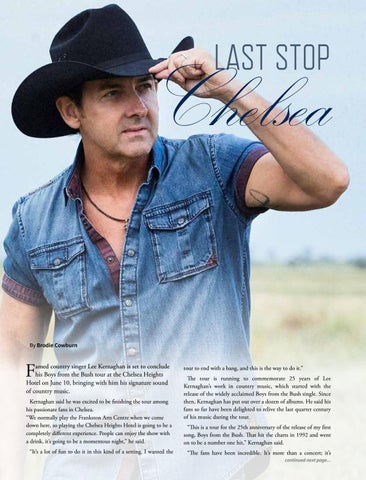 amed country singer Lee Kernaghan is set to conclude his Boys from the Bush tour at the Chelsea Heights Hotel on June 10, bringing with him his signature sound of country music. Kernaghan said he was excited to be finishing the tour among his passionate fans in Chelsea. “We normally play the Frankston Arts Centre when we come down here, so playing the Chelsea Heights Hotel is going to be a completely different experience. People can enjoy the show with a drink, it’s going to be a momentous night,” he said. “It’s a lot of fun to do it in this kind of a setting. I wanted the

tour to end with a bang, and this is the way to do it.” The tour is running to commemorate 25 years of Lee Kernaghan’s work in country music, which started with the release of the widely acclaimed Boys from the Bush single. Since then, Kernaghan has put out over a dozen of albums. He said his fans so far have been delighted to relive the last quarter century of his music during the tour. “This is a tour for the 25th anniversary of the release of my first song, Boys from the Bush. That hit the charts in 1992 and went on to be a number one hit,” Kernaghan said. “The fans have been incredible. It’s more than a concert; it’s continued next page...