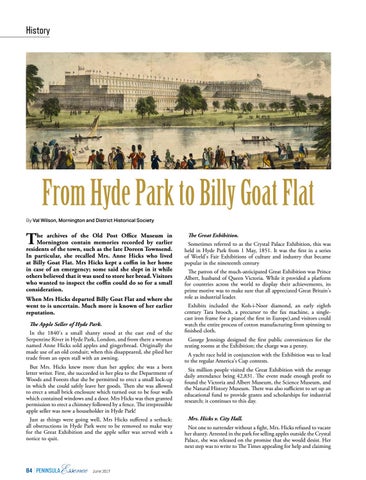 he archives of the Old Post Office Museum in Mornington contain memories recorded by earlier residents of the town, such as the late Doreen Townsend. In particular, she recalled Mrs. Anne Hicks who lived at Billy Goat Flat. Mrs Hicks kept a coffin in her home in case of an emergency; some said she slept in it while others believed that it was used to store her bread. Visitors who wanted to inspect the coffin could do so for a small consideration. When Mrs Hicks departed Billy Goat Flat and where she went to is uncertain. Much more is known of her earlier reputation. The Apple Seller of Hyde Park.

In the 1840's a small shanty stood at the east end of the Serpentine River in Hyde Park, London, and from there a woman named Anne Hicks sold apples and gingerbread. Originally she made use of an old conduit; when this disappeared, she plied her trade from an open stall with an awning. But Mrs. Hicks knew more than her apples; she was a born letter writer. First, she succeeded in her plea to the Department of Woods and Forests that she be permitted to erect a small lock-up in which she could safely leave her goods. Then she was allowed to erect a small brick enclosure which turned out to be four walls which contained windows and a door. Mrs Hicks was then granted permission to erect a chimney followed by a fence. The irrepressible apple seller was now a householder in Hyde Park! Just as things were going well, Mrs Hicks suffered a setback: all obstructions in Hyde Park were to be removed to make way for the Great Exhibition and the apple seller was served with a notice to quit.

The Great Exhibition. Sometimes referred to as the Crystal Palace Exhibition, this was held in Hyde Park from 1 May, 1851. It was the first in a series of World's Fair Exhibitions of culture and industry that became popular in the nineteenth century The patron of the much-anticipated Great Exhibition was Prince Albert, husband of Queen Victoria. While it provided a platform for countries across the world to display their achievements, its prime motive was to make sure that all appreciated Great Britain's role as industrial leader. Exhibits included the Koh-i-Noor diamond, an early eighth century Tara brooch, a precursor to the fax machine, a singlecast iron frame for a piano( the first in Europe),and visitors could watch the entire process of cotton manufacturing from spinning to finished cloth. George Jennings designed the first public conveniences for the resting rooms at the Exhibition; the charge was a penny. A yacht race held in conjunction with the Exhibition was to lead to the regular America's Cup contests. Six million people visited the Great Exhibition with the average daily attendance being 42,831. The event made enough profit to found the Victoria and Albert Museum, the Science Museum, and the Natural History Museum. There was also sufficient to set up an educational fund to provide grants and scholarships for industrial research; it continues to this day. Mrs. Hicks v. City Hall. Not one to surrender without a fight, Mrs. Hicks refused to vacate her shanty. Arrested in the park for selling apples outside the Crystal Palace, she was released on the promise that she would desist. Her next step was to write to The Times appealing for help and claiming