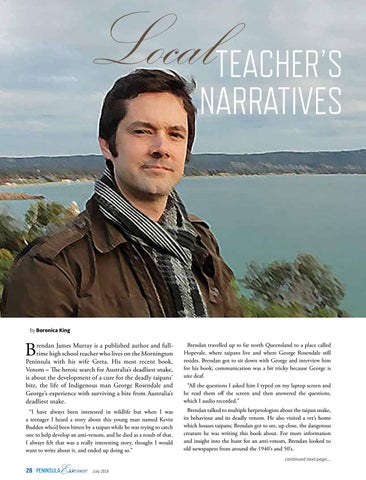 rendan James Murray is a published author and fulltime high school teacher who lives on the Mornington Peninsula with his wife Greta. His most recent book, Venom – The heroic search for Australia’s deadliest snake, is about the development of a cure for the deadly taipans' bite, the life of Indigenous man George Rosendale and George’s experience with surviving a bite from Australia’s deadliest snake.

Brendan travelled up to far north Queensland to a place called Hopevale, where taipans live and where George Rosendale still resides. Brendan got to sit down with George and interview him for his book; communication was a bit tricky because George is uite deaf.

“I have always been interested in wildlife but when I was a teenager I heard a story about this young man named Kevin Budden who’d been bitten by a taipan while he was trying to catch one to help develop an anti-venom, and he died as a result of that. I always felt that was a really interesting story, thought I would want to write about it, and ended up doing so.”

Brendan talked to multiple herpetologists about the taipan snake, its behaviour and its deadly venom. He also visited a vet’s home which houses taipans; Brendan got to see, up close, the dangerous creature he was writing this book about. For more information and insight into the hunt for an anti-venom, Brendan looked to old newspapers from around the 1940’s and 50’s.