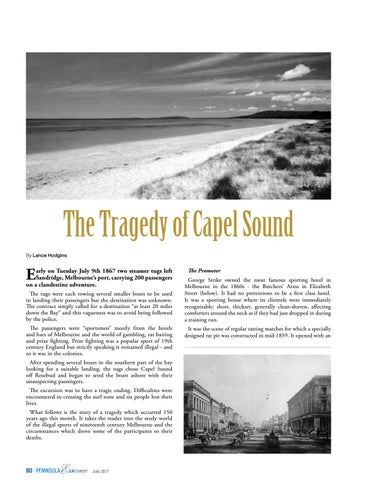 The Tragedy of Capel Sound By Lance Hodgins

arly on Tuesday July 9th 1867 two steamer tugs left Sandridge, Melbourne’s port, carrying 200 passengers on a clandestine adventure. The tugs were each towing several smaller boats to be used in landing their passengers but the destination was unknown. The contract simply called for a destination “at least 20 miles down the Bay” and this vagueness was to avoid being followed by the police. The passengers were “sportsmen” mostly from the hotels and bars of Melbourne and the world of gambling, rat baiting and prize fighting. Prize fighting was a popular sport of 19th century England but strictly speaking it remained illegal - and so it was in the colonies. After spending several hours in the southern part of the bay looking for a suitable landing, the tugs chose Capel Sound off Rosebud and began to send the boats ashore with their unsuspecting passengers. The excursion was to have a tragic ending. Difficulties were encountered in crossing the surf zone and six people lost their lives. What follows is the story of a tragedy which occurred 150 years ago this month. It takes the reader into the seedy world of the illegal sports of nineteenth century Melbourne and the circumstances which drove some of the participants to their deaths.

The Promoter George Strike owned the most famous sporting hotel in Melbourne in the 1860s - the Butchers’ Arms in Elizabeth Street (below). It had no pretentions to be a first class hotel. It was a sporting house where its clientele were immediately recognisable: short, thickset, generally clean-shaven, affecting comforters around the neck as if they had just dropped in during a training run. It was the scene of regular ratting matches for which a specially designed rat pit was constructed in mid-1859. It opened with an