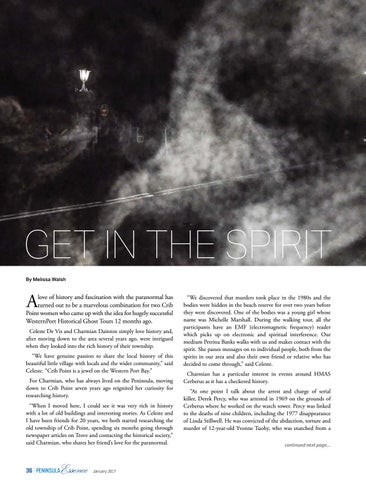 GET IN THE SPIRIT By Melissa Walsh

love of history and fascination with the paranormal has turned out to be a marvelous combination for two Crib Point women who came up with the idea for hugely successful WesternPort Historical Ghost Tours 12 months ago. Celeste De Vis and Charmian Dainton simply love history and, after moving down to the area several years ago, were intrigued when they looked into the rich history of their township. “We have genuine passion to share the local history of this beautiful little village with locals and the wider community,” said Celeste. “Crib Point is a jewel on the Western Port Bay.” For Charmian, who has always lived on the Peninsula, moving down to Crib Point seven years ago reignited her curiosity for researching history. “When I moved here, I could see it was very rich in history with a lot of old buildings and interesting stories. As Celeste and I have been friends for 20 years, we both started researching the old township of Crib Point, spending six months going through newspaper articles on Trove and contacting the historical society,” said Charmian, who shares her friend’s love for the paranormal.

“We discovered that murders took place in the 1980s and the bodies were hidden in the beach reserve for over two years before they were discovered. One of the bodies was a young girl whose name was Michelle Marshall. During the walking tour, all the participants have an EMF (electromagnetic frequency) reader which picks up on electronic and spiritual interference. Our medium Petrina Banks walks with us and makes contact with the spirit. She passes messages on to individual people, both from the spirits in our area and also their own friend or relative who has decided to come through,” said Celeste. Charmian has a particular interest in events around HMAS Cerberus as it has a checkered history. “At one point I talk about the arrest and charge of serial killer, Derek Percy, who was arrested in 1969 on the grounds of Cerberus where he worked on the watch tower. Percy was linked to the deaths of nine children, including the 1977 disappearance of Linda Stillwell. He was convicted of the abduction, torture and murder of 12-year-old Yvonne Tuohy, who was snatched from a continued next page...