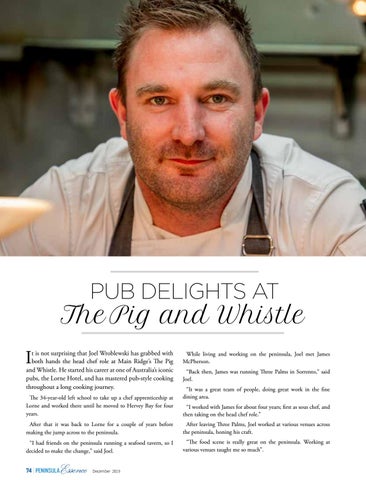 The Pig and Whistle I

t is not surprising that Joel Wroblewski has grabbed with both hands the head chef role at Main Ridge’s The Pig and Whistle. He started his career at one of Australia’s iconic pubs, the Lorne Hotel, and has mastered pub-style cooking throughout a long cooking journey.

The 34-year-old left school to take up a chef apprenticeship at Lorne and worked there until he moved to Hervey Bay for four years.

While living and working on the peninsula, Joel met James McPherson. “Back then, James was running Three Palms in Sorrento,” said Joel. “It was a great team of people, doing great work in the fine dining area. “I worked with James for about four years; first as sous chef, and then taking on the head chef role.”

After that it was back to Lorne for a couple of years before making the jump across to the peninsula.

After leaving Three Palms, Joel worked at various venues across the peninsula, honing his craft.

“I had friends on the peninsula running a seafood tavern, so I decided to make the change,” said Joel.

“The food scene is really great on the peninsula. Working at various venues taught me so much”.