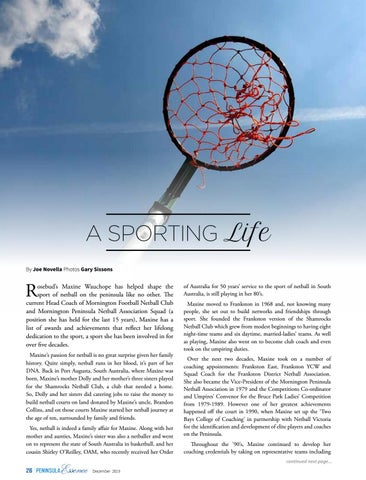 osebud’s Maxine Wauchope has helped shape the sport of netball on the peninsula like no other. The current Head Coach of Mornington Football Netball Club and Mornington Peninsula Netball Association Squad (a position she has held for the last 15 years), Maxine has a list of awards and achievements that reflect her lifelong dedication to the sport, a sport she has been involved in for over five decades.

Maxine’s passion for netball is no great surprise given her family history. Quite simply, netball runs in her blood, it’s part of her DNA. Back in Port Augusta, South Australia, where Maxine was born, Maxine’s mother Dolly and her mother’s three sisters played for the Shamrocks Netball Club, a club that needed a home. So, Dolly and her sisters did catering jobs to raise the money to build netball courts on land donated by Maxine’s uncle, Brandon Collins, and on those courts Maxine started her netball journey at the age of ten, surrounded by family and friends. Yes, netball is indeed a family affair for Maxine. Along with her mother and aunties, Maxine’s sister was also a netballer and went on to represent the state of South Australia in basketball, and her cousin Shirley O’Reilley, OAM, who recently received her Order

of Australia for 50 years’ service to the sport of netball in South Australia, is still playing in her 80’s. Maxine moved to Frankston in 1968 and, not knowing many people, she set out to build networks and friendships through sport. She founded the Frankston version of the Shamrocks Netball Club which grew from modest beginnings to having eight night-time teams and six daytime, married-ladies’ teams. As well as playing, Maxine also went on to become club coach and even took on the umpiring duties. Over the next two decades, Maxine took on a number of coaching appointments: Frankston East, Frankston YCW and Squad Coach for the Frankston District Netball Association. She also became the Vice-President of the Mornington Peninsula Netball Association in 1979 and the Competitions Co-ordinator and Umpires’ Convenor for the Bruce Park Ladies’ Competition from 1979-1989. However one of her greatest achievements happened off the court in 1990, when Maxine set up the ‘Two Bays College of Coaching’ in partnership with Netball Victoria for the identification and development of elite players and coaches on the Peninsula. Throughout the '90’s, Maxine continued to develop her coaching credentials by taking on representative teams including continued next page...