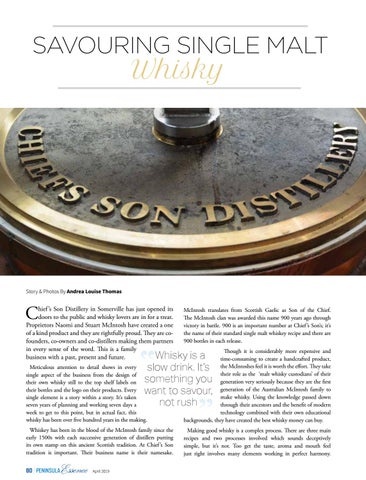 hief ’s Son Distillery in Somerville has just opened its doors to the public and whisky lovers are in for a treat. Proprietors Naomi and Stuart McIntosh have created a one of a kind product and they are rightfully proud. They are cofounders, co-owners and co-distillers making them partners in every sense of the word. This is a family business with a past, present and future.

McIntosh translates from Scottish Gaelic as Son of the Chief. The McIntosh clan was awarded this name 900 years ago through victory in battle. 900 is an important number at Chief ’s Son’s; it’s the name of their standard single malt whiskey recipe and there are 900 bottles in each release.

Meticulous attention to detail shows in every single aspect of the business from the design of their own whisky still to the top shelf labels on their bottles and the logo on their products. Every single element is a story within a story. It’s taken seven years of planning and working seven days a week to get to this point, but in actual fact, this whisky has been over five hundred years in the making.

Though it is considerably more expensive and time-consuming to create a handcrafted product, the McIntoshes feel it is worth the effort. They take their role as the ‘malt whisky custodians’ of their generation very seriously because they are the first generation of the Australian McIntosh family to make whisky. Using the knowledge passed down through their ancestors and the benefit of modern technology combined with their own educational backgrounds, they have created the best whisky money can buy.

Whiskey has been in the blood of the McIntosh family since the early 1500s with each successive generation of distillers putting its own stamp on this ancient Scottish tradition. At Chief ’s Son tradition is important. Their business name is their namesake.

Making good whisky is a complex process. There are three main recipes and two processes involved which sounds deceptively simple, but it’s not. Too get the taste, aroma and mouth feel just right involves many elements working in perfect harmony.

Whisky is a slow drink. It’s something you want to savour, not rush