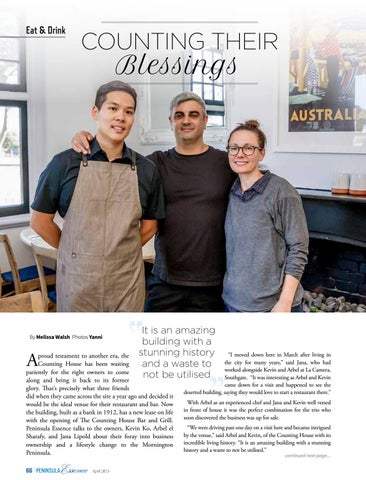 proud testament to another era, the Counting House has been waiting patiently for the right owners to come along and bring it back to its former glory. That’s precisely what three friends did when they came across the site a year ago and decided it would be the ideal venue for their restaurant and bar. Now the building, built as a bank in 1912, has a new lease on life with the opening of The Counting House Bar and Grill. Peninsula Essence talks to the owners, Kevin Ko, Arbel el Sharafy, and Jana Lipold about their foray into business ownership and a lifestyle change to the Mornington Peninsula.

“I moved down here in March after living in the city for many years,” said Jana, who had worked alongside Kevin and Arbel at La Camera, Southgate. “It was interesting as Arbel and Kevin came down for a visit and happened to see the deserted building, saying they would love to start a restaurant there.” With Arbel as an experienced chef and Jana and Kevin well versed in front of house it was the perfect combination for the trio who soon discovered the business was up for sale. “We were driving past one day on a visit here and became intrigued by the venue,” said Arbel and Kevin, of the Counting House with its incredible living history. “It is an amazing building with a stunning history and a waste to not be utilised.” continued next page...