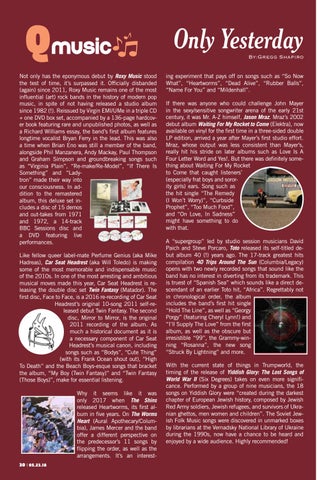 Not only has the eponymous debut by Roxy Music stood the test of time, it’s surpassed it. Officially disbanded (again) since 2011, Roxy Music remains one of the most influential (art) rock bands in the history of modern pop music, in spite of not having released a studio album since 1982 (!). Reissued by Virgin EMI/UMe in a triple CD + one DVD box set, accompanied by a 136-page hardcover book featuring rare and unpublished photos, as well as a Richard Williams essay, the band’s first album features longtime vocalist Bryan Ferry in the lead. This was also a time when Brian Eno was still a member of the band, alongside Phil Manzanera, Andy Mackay, Paul Thompson and Graham Simpson and groundbreaking songs such as “Virginia Plain”, “Re-make/Re-Model”, “If There Is Something” and “Ladytron” made their way into our consciousness. In addition to the remastered album, this deluxe set includes a disc of 15 demos and out-takes from 1971 and 1972, a 14-track BBC Sessions disc and a DVD featuring live performances. Like fellow queer label-mate Perfume Genius (aka Mike Hadreas),  Car Seat Headrest  (aka Will Toledo) is making some of the most memorable and indispensable music of the 2010s. In one of the most arresting and ambitious musical moves made this year, Car Seat Headrest is releasing the double disc set Twin Fantasy  (Matador). The first disc, Face to Face, is a 2016 re-recording of Car Seat Headrest’s original 10-song 2011 self-released debut Twin Fantasy. The second disc, Mirror to Mirror, is the original 2011 recording of the album. As much a historical document as it is a necessary component of Car Seat Headrest’s musical canon, including songs such as “Bodys”, “Cute Thing” (with its Frank Ocean shout out), “High To Death” and the Beach Boys-esque songs that bracket the album, “My Boy (Twin Fantasy)” and “Twin Fantasy (Those Boys)”, make for essential listening. Why it seems like it was only 2017 when  The Shins released Heartworms, its first album in five years. On The Worms Heart  (Aural Apothecary/Columbia), James Mercer and the band offer a different perspective on the predecessor’s 11 songs by flipping the order, as well as the arrangements. It’s an interest30 | 05.23.18

ing experiment that pays off on songs such as “So Now What”, “Heartworms”, “Dead Alive”, “Rubber Balls”, “Name For You” and “Mildenhall”. If there was anyone who could challenge John Mayer in the sexy/sensitive songwriter arena of the early 21st century, it was Mr. A-Z himself, Jason Mraz. Mraz’s 2002 debut album Waiting For My Rocket to Come (Elektra), now available on vinyl for the first time in a three-sided double LP edition, arrived a year after Mayer’s first studio effort. Mraz, whose output was less consistent than Mayer’s, really hit his stride on later albums such as  Love Is A Four Letter Word and Yes!. But there was definitely something about Waiting For My Rocket to Come  that caught listeners’ (especially frat boys and sorority girls) ears. Song such as the hit single “The Remedy (I Won’t Worry)”, “Curbside Prophet”, “Too Much Food”, and “On Love, In Sadness” might have something to do with that. A “supergroup” led by studio session musicians David Paich and Steve Porcaro, Toto released its self-titled debut album 40 (!) years ago. The 17-track greatest hits compilation  40 Trips Around The Sun  (Columbia/Legacy) opens with two newly recorded songs that sound like the band has no interest in diverting from its trademark. This is truest of “Spanish Sea” which sounds like a direct descendant of an earlier Toto hit, “Africa”. Regrettably not in chronological order, the album includes the band’s first hit single “Hold The Line”, as well as “Georgy Porgy” (featuring Cheryl Lynn!) and “I’ll Supply The Love” from the first album, as well as the obscure but irresistible “99”, the Grammy-winning “Rosanna”, the new song “Struck By Lightning” and more. With the current state of things in Trumpworld, the timing of the release of  Yiddish Glory: The Lost Songs of World War II  (Six Degrees) takes on even more significance. Performed by a group of nine musicians, the 18 songs on Yiddish Glory were “created during the darkest chapter of European Jewish history, composed by Jewish Red Army soldiers, Jewish refugees, and survivors of Ukranian ghettos, men women and children”. The Soviet Jewish Folk Music songs were discovered in unmarked boxes by librarians at the Vernadsky National Library of Ukraine during the 1990s, now have a chance to be heard and enjoyed by a wide audience. Highly recommended! 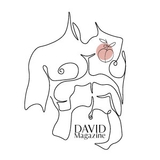