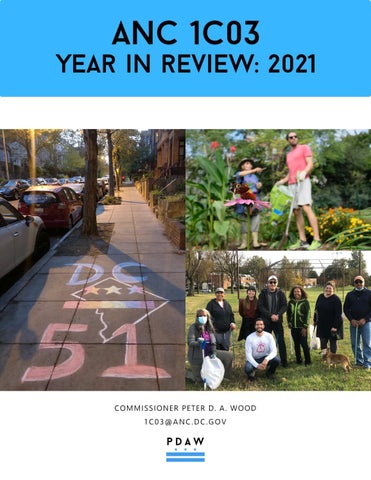 What is ANC 1C03? While some of us likely know far too much about Advisory Neighborhood Commissions (ANCs), others might hear the term ANC and wonder what it refers to exactly. Washington, DC, is divided into eight wards, all of which have roughly the same population. Each of those wards is then divided into ANCs, with each ward currently having 4-6 Commissions present. From there, each ANC is divided into Single Member Districts (SMDs) of about 2,000 residents. Some ANCs have as few as two SMDs (and thus two commissioners), while others have as many as twelve. ANC 1C03 refers to the Single Member District I represent in Adams Morgan: Ward 1 + ANC C + SMD 3 = ANC 1C03. All these boundaries throughout the city are based on US census data, which is updated once a decade. Because of the COVID19 pandemic, census data was slow to be released in 2021. Nonetheless, the redistricting process—which will create new lines for wards, ANCs, and SMDs in DC —should be done in time for the 2022 election cycle. Most ANC boundaries will remain untouched, but some will be adjusted to account for population change since 2010. In this document you can find a summary of activities during 2021 involving ANC 1C03 and my work as commissioner for the area. Thank you for all your continued support, and let&#39;s make 2022 as great a year as possible!

Community Events &amp; outreach Hands down the best part about being ANC commissioner is getting to meet so many people in the DC community. Our official duties are fairly limited, but I eagerly go beyond those to organize and participate in events throughout the year. Here is a brief recap of some of the main affairs I took part in during 2021, as well as key neighborhood improvements I helped urge DC agencies to finalize. Neighborhood trash cleanups: January 10 after insurrectionists stayed nearby March 20 with the Reed Cooke Neighborhood Association (RCNA) April 24 multi-ANC cleanup with ANC 1B and 2B commissioners May 22 with Washington Parks &amp; People in Malcolm X Park July 10 with RCNA November 6 crosstown cleanup covering over 11 miles Organized and moderated affordable housing panel Judge in BID&#39;s Valentine&#39;s Day contest Organized and moderated domestic violence panel Facilitated water main repair near Kalorama Park Facilitated replacement of US flag in Kalorama Park Facilitated replacement of sand and mulch in Kalorama Park Facilitated approval of Green Zone streatery on 18th St COVID vaccine registration outreach on Columbia Rd STAY DC application assistance with Spanish-speaking residents Organized Holiday caroling for Joseph&#39;s House and Christ House Completed ANC trainings on ANC responsibilities, Robert&#39;s Rules, zoning, ABRA

Divided votes Most ANC votes are fairly mundane and pass unanimously. Case in point: in 2021 ANC 1C final votes were &quot;yes&quot; 95% of the time (308-12-3), the exact same rate as the 2019-2020 term (783-20-15). But every so often, commissioners disagree on the matter at hand. I personally think dissent is normal, often healthy, and can help teach us all more deeply about issues that matter to the community. Below are brief summaries of some of the ANC 1C votes that drew disagreement in 2021. SunTrust Plaza litigation (January 2021) Final vote passed 6-2 (I voted against) This resolution requested DC&#39;s attorney general become involved in a lawsuit over the plaza, though the AG never took such action and the lawsuit failed Letter to ABRA authorizing Madam&#39;s Organ to host live music on balcony (May 2021) Final vote failed 3-5 (I voted in favor) This letter would have supported temporary permission for outdoor music in order to adapt during the COVID-19 health emergency Resolution on budget priorities for FY 2022 (June 2021) An amendment passed 4-3 striking text which called for tax increases on higher earners, defunding MPD (I voted against removing that text) Despite this amendment, DC Council&#39;s final budget partially aligned with the preferences I advocated for and raised taxes on those with high incomes Special exception relief from lot occupancy restrictions at 2240 Ontario Rd NW (July 2021) Final vote passed 5-2 (I voted in favor) This allowed property owners to slightly expand the rear of their building Contract renewal for meeting and A/V services for ANC 1C (September 2021) Final vote passed 2-0-3 (I abstained my vote) Several commissioners joined me in expressing confusion over contract terms Amended request for special exception at 2240 Ontario Rd NW (October 2021) Final vote failed 3-3 (I voted no, which meant I favored the original exemption allowing two alley parking spots to be smaller than normal)

The Grill from Ipanema

Goals in review: Safe Homes Let&#39;s take a moment to review my performance as commissioner during 2021. I entered the year with three main sets of goals: safe homes, vibrant streets, and affordable living. Where did I meet expectations? Where did I come up short? Safe Homes goal: Help create and sustain a living environment where residents and visitors are free from harm within a healthy, happy, supportive community Objective 1: Advance criminal justice and police reform Successes: Supported multiple residents who sought alternatives to police for public safety issues Challenges: MPD budget continues to grow despite examples of abuse of power Results: Mixed Objective 2: Increase Ward 1 domestic violence budget Successes: FY 2022 budget expanded shelters for survivors of abuse ($67m + $1.2m for LGBTQ-focused services), exceeding my recommendations to Council Challenges: Domestic violence was cited as the primary cause of homelessness for 42% of homeless adults in DC in 2021 Results: Positive Objective 3: Support unhoused residents to attain permanent housing and remain safe throughout the process Successes: Advocated for and with unhoused 1C03 residents in multiple settings Challenges: DC&#39;s encampment program continues to forcibly displace residents Results: Mixed

Goals in review: Affordable Living Affordable Living goal: Expand and/or modify the institutions which make it easier for people to have enough resources to live in DC long-term Objective 1: Achieve rent and mortgage cancellation during public emergency Successes: Programs including STAY DC were created and helped many residents Challenges: Rent assistance funds have exhausted, evictions protections lapsed Results: Moderately positive Objective 2: Improve wages and benefits through support for local labor unions Successes: Maintained outreach with local employees and employers on their needs during COVID-19 crisis Challenges: Informal, undocumented, and/or tipped workers continue to struggle, unions remain underrepresented in Adams Morgan Results: Mixed Objective 3: Advocate for a fair system of taxation and wealth parity Successes: The FY 2022 budget is one of the most progressive in DC history, reflecting much of what I testified to DC Council in favor of Challenges: Enormous economic inequities persist within the DC population Results: Mixed

priorities for 2022 With a new year upon us, I want to set out goals for my role as ANC 1C03 commissioner in 2022. Keeping the same three-pronged theme as 2021, below are some of the main objectives I hope to accomplish. Safe Homes Convert the 1800 blocks of Kalorama Rd, Wyoming Ave into one-ways with speed bumps and bike lanes Increase the number of domestic violence-specific first responders and accompanying training programs Decriminalize illicit opioid use, improve funding for opioid abuse services Vibrant Streets Restore call boxes, organize community art projects in &amp; near Kalorama Park Improve small business retention by supporting good faith businesses to acquire proper licensing in a timely manner Refresh efforts to establish a pedestrian mall on 18th Street NW Affordable Living Help create &amp; maintain deeply affordable housing in Adams Morgan Advocate for a cleaner, cheaper energy mix in DC Improve protections for undocumented workers and their families