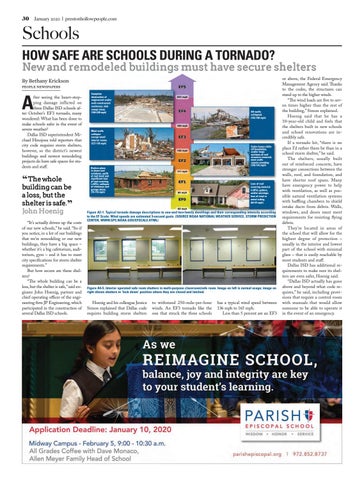 HOW SAFE ARE SCHOOLS DURING A TORNADO?

fter seeing the heart-stopping damage inflicted on three Dallas ISD schools after October’s EF3 tornado, many wondered: What has been done to make schools safer in the event of severe weather? Dallas ISD superintendent Michael Hinojosa told reporters that city code requires storm shelters, however, so the district’s newest buildings and newest remodeling projects do have safe spaces for students and staff.

Broken glass in doors and windows, uplift of roof deck and significant loss of roof covering (>20%), collapse of chimneys and garage doors. (79-116 mph)

Figure A4-5. Interior operated safe room shutters in multi-purpose classroom/safe room. Image on left is normal usage; image on right shows shutters in ‘lock down’ position where they are closed and latched.

to withstand 250-mile-per-hour winds. An EF3 tornado like the one that struck the three schools

or above, the Federal Emergency Management Agency said. Thanks to the codes, the structures can stand up to the higher winds. “The wind loads are five to seven times higher than the rest of the building,” Simon explained. Hoenig said that he has a 10-year-old child and feels that the shelters built in new schools and school renovations are incredibly safe. If a tornado hit, “there is no place I’d rather them be than in a school storm shelter,” he said. The shelters, usually built out of reinforced concrete, have stronger connections between the walls, roof, and foundation, and have shorter roof spans. Many have emergency power to help with ventilation, as well as possible natural ventilation systems with baffling chambers to shield intake ducts from debris. Walls, windows, and doors must meet requirements for resisting flying debris. They’re located in areas of the school that will allow for the highest degree of protection – usually in the interior and lowest part of the school with minimal glass – that is easily reachable by most students and staff. Dallas ISD has additional requirements to make sure its shelters are even safer, Hoenig said. “Dallas ISD actually has gone above and beyond what code requires,” he said, including provisions that require a control room with manuals that would allow someone to be able to operate it in the event of an emergency.