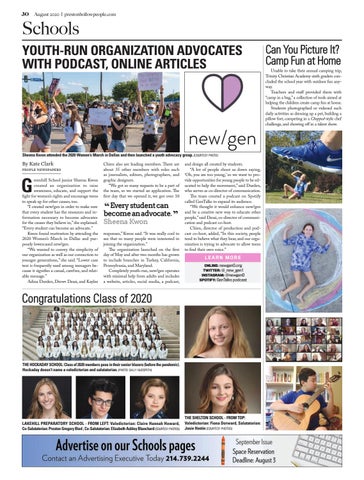 reenhill School junior Sheena Kwon created an organization to raise awareness, educate, and support the fight for women’s rights and encourage teens to speak up for other causes, too. “I created new/gen in order to make sure that every student has the resources and information necessary to become advocates for the causes they believe in,” she explained. “Every student can become an advocate.” Kwon found motivation by attending the 2020 Women’s March in Dallas and purposely lowercased new/gen. “We wanted to convey the simplicity of our organization as well as our connection to younger generations,” she said. “Lower case text is frequently used among teenagers because it signifies a casual, carefree, and relatable message.” Adina Durden, Drewv Desai, and Kaylee

Chien also are leading members. There are about 35 other members with roles such as journalists, editors, photographers, and graphic designers. “We got so many requests to be a part of the team, so we started an application. The first day that we opened it, we got over 10

Every student can become an advocate. Sheena Kwon

responses,” Kwon said. “It was really cool to see that so many people were interested in joining the organization.” The organization launched on the first day of May and after two months has grown to include branches in Turkey, California, Pennsylvania, and Maryland. Completely youth-run, new/gen operates with minimal help from adults and includes a website, articles, social media, a podcast,

and design all created by students. “A lot of people shoot us down saying, ‘Oh, you are too young,’ so we want to provide opportunities for young people to be educated to help the movement,” said Durden, who serves as co-director of communication. The team created a podcast on Spotify called GenTalks to expand its audience. “We thought it would enhance new/gen and be a creative new way to educate other people,” said Desai, co-director of communication and podcast co-host. Chien, director of production and podcast co-host, added, “In this society, people tend to believe what they hear, and our organization is trying to advocate to allow teens to find their own voice.”

THE HOCKADAY SCHOOL: Class of 2020 members pose in their senior blazers (before the pandemic). Hockaday doesn’t name a valedictorian and salutatorian. (PHOTO: SALLY HUDSPETH)

Can You Picture It? Camp Fun at Home Unable to take their annual camping trip, Trinity Christian Academy sixth graders concluded the school year with outdoor fun anyway. Teachers and staff provided them with “camp in a bag,” a collection of tools aimed at helping the children create camp fun at home. Students photographed or videoed such daily activities as dressing up a pet, building a pillow fort, competing in a Chopped-style chef challenge, and showing off in a talent show.