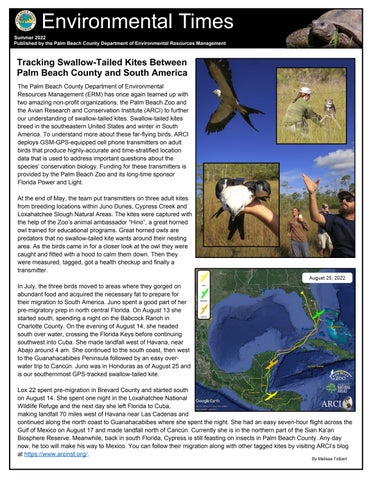 Tracking Swallow-Tailed Kites Between Palm Beach County and South America The Palm Beach County Department of Environmental Resources Management (ERM) has once again teamed up with two amazing non-profit organizations, the Palm Beach Zoo and the Avian Research and Conservation Institute (ARCI) to further our understanding of swallow-tailed kites. Swallow-tailed kites breed in the southeastern United States and winter in South America. To understand more about these far-flying birds, ARCI deploys GSM-GPS-equipped cell phone transmitters on adult birds that produce highly-accurate and time-stratified location data that is used to address important questions about the species’ conservation biology. Funding for these transmitters is provided by the Palm Beach Zoo and its long-time sponsor Florida Power and Light. At the end of May, the team put transmitters on three adult kites from breeding locations within Juno Dunes, Cypress Creek and Loxahatchee Slough Natural Areas. The kites were captured with the help of the Zoo’s animal ambassador “Hino”, a great horned owl trained for educational programs. Great horned owls are predators that no swallow-tailed kite wants around their nesting area. As the birds came in for a closer look at the owl they were caught and fitted with a hood to calm them down. Then they were measured, tagged, got a health checkup and finally a transmitter. In July, the three birds moved to areas where they gorged on abundant food and acquired the necessary fat to prepare for their migration to South America. Juno spent a good part of her pre-migratory prep in north central Florida. On August 13 she started south, spending a night on the Babcock Ranch in Charlotte County. On the evening of August 14, she headed south over water, crossing the Florida Keys before continuing southwest into Cuba. She made landfall west of Havana, near Abajo around 4 am. She continued to the south coast, then west to the Guanahacabibes Peninsula followed by an easy overwater trip to Cancún. Juno was in Honduras as of August 25 and is our southernmost GPS-tracked swallow-tailed kite. Lox 22 spent pre-migration in Brevard County and started south on August 14. She spent one night in the Loxahatchee National Wildlife Refuge and the next day she left Florida to Cuba, making landfall 70 miles west of Havana near Las Cadenas and continued along the north coast to Guanahacabibes where she spent the night. She had an easy seven-hour flight across the Gulf of Mexico on August 17 and made landfall north of Cancún. Currently she is in the northern part of the Sian Ka’an Biosphere Reserve. Meanwhile, back in south Florida, Cypress is still feasting on insects in Palm Beach County. Any day now, he too will make his way to Mexico. You can follow their migration along with other tagged kites by visiting ARCI’s blog at https://www.arcinst.org/. By Melissa Tolbert

Cameron Kent (right) caught three fish, two of which were sportfish - a 36-inch common snook and a 19-inch permit, the only permit caught during the Fishing Challenge. His other catch was a 66-inch nurse shark. Cameron fished 2 days in the lagoon.

lagoon. Many of his catches were near habitat restoration sites in the lagoon. David’s largest catch was a 40-inch great barracuda.

Every summer Youth Services and Palm Beach County Department of Environmental Resources Management (ERM) collaborate on a program called Green Futures. This program exposes students to different career opportunities within ERM. It is a paid, 4-week session internship that inspires youth to think beyond what they know. The students learn about invasive plant species, local wildlife, maintenance of natural areas and many more environmental jobs. They experience hands-on training and work in a professional environment. This work can be on land or underwater. One of those underwater adventures took place at Peanut Island in Lake Worth Lagoon. For some of the students it was their first time on a boat and first time snorkeling. Once comfortable in the water, students saw angelfish, parrotfish, different types of coral reefs and even squid. By the end of the day the students couldn’t wait to get back in the water. These experiences give the students an appreciation for the natural world and a glimpse of what an environmental career is all about. It also reminds ERM staff of the importance of our jobs - to preserve, protect and enhance Palm Beach County’s land and water resources. By Dayana Castillo

Tackling Invasive Plants in the Chain of Lakes Environmental Resources Management Mosquito Control staff manage aquatic invasive plants on the Osborne Chain of Lakes in partnership with the Florida Fish and Wildlife Conservation Commission (FWC). The Chain of Lakes is a system of local water bodies connected by canals. The Chain of Lakes includes lakes Clarke, Ida, Eden, Osborne and Pine. Invasive aquatic plants growing in the lakes degrade water quality and recreational opportunities. The goal of removing invasive plants is to improve the quality of these important urban habitats that support wildlife, boating, fishing and the local economy. Hydrilla, water hyacinth and water lettuce are just a few of the plants that are controlled through this program. Recently, staff completed a treatment targeting crested floating heart (Nymphoides cristata). Check out the before and after photos below to see the effects of this invasive plant removal program. By Steven Fazekas

Tarpon Cove Is For The Birds!

Restoration work continues at Tarpon Cove, located in Lake Worth Lagoon just south of Okeechobee Blvd. and adjacent to the El Cid neighborhood. Two northern mangrove islands are under construction. This multiyear restoration project, begun in 2018, will encompass 46 acres that includes five islands and approximately 23 acres of seagrass habitat. One of the most visible successes of Lake Worth Lagoon restoration projects like Tarpon Cove is the wildlife attracted to the islands. In 2022 the coastal bird nesting story at Tarpon Cove continued with 42 black skimmers and 310 least terns observed in early August. At least 36 black simmer chicks were observed along with 79 least tern chicks. This is the third year of nesting black skimmers and the second year for least terns. In addition to black skimmers and least terns, a pair of American oystercatchers nested on Tarpon Cove for the fourth year and successfully raised their chick. These nesting islands are marked with “Do Not Enter – Important Nesting Area” signs to allow the birds to successfully raise their young. Other birds observed at the created islands include great blue herons, black-necked stilts, Wilson plovers, white ibis, roseate spoonbills and a wide variety of gulls. Learn more about the Department&#39;s restoration work within Lake Worth Lagoon at www.pbclakeworthlagoon.com. 5

Baby Birds Galore at Loxahatchee Slough Natural Area Rookeries Staff documented another successful breeding season at the Egretta (small heron) rookeries in Loxahatchee Slough Natural Area. There were 167 nests consisting of mostly little blue herons, followed by tricolored herons, cattle egrets, snowy egrets and black-crowned night-herons. Little blue and tricolored herons were observed in varying states of nesting activity. Some of the birds had youngsters that were almost as big as the adults. Other birds were still sitting on eggs. Tricolored and little blue herons are colonial nesters. These colonies are often composed of nests from a variety of herons and egrets. These birds typically nest in flooded areas or islands with dense vegetation. Being surrounded by water is added protection against most predators - with the exception of alligators. Considering that there are only 300-500 Egretta nests documented in the Everglades, our restoration efforts within Palm Beach County’s natural areas are providing critical habitat for species that have suffered dramatic nesting declines throughout South Florida. Learn more about Loxahatchee Slough Natural Area at www.pbcnaturalareas.com. By Melissa Tolbert

KEEPING IT CLEAN AND GREEN

Throughout the month of June, Department of Environmental Resources Management (ERM) staff hosted five public sea turtle walks through the Adventure Awaits Program. These special events were permitted through the Florida Fish &amp; Wildlife Conservation Commission. At each event ERM biologists gave a presentation highlighting sea turtle biology and conservation. Then the group headed to the beach to safely observe a nesting loggerhead sea turtle. This season ERM staff educated over 160 guests through the public sea turtle walks and successfully observed a nesting loggerhead sea turtle on four of the five occasions. During a few of these events, Heidi Weiksnar, a high-school student collaborating with ERM to achieve her Girl Scout Gold Award, presented her final prototype of the Sea Turtle Lighting Test cards she created for ERM’s Listed Species Program. Sea turtles are strongly attracted to artificial lighting. This poses a major threat to both nesting female sea turtles and their hatchlings. Bright lighting can often alter their critical nocturnal behavior of finding the sea after emerging. If disoriented, hatchlings may use up much of their energy reserves, leaving them susceptible to harm. Nesting females can also become disoriented from artificial lights, or may even return to the water without nesting. Heidi&#39;s Sea Turtle Lighting Test cards utilize a special film that, when looked through, helps identify if artificial lighting meets the proper requirements for safe sea turtle lighting. These cards will be distributed to beachfront properties across Palm Beach County for managers to utilize for outreach and education. Want to learn more about Palm Beach County’s nesting sea turtles? Visit https://discover.pbcgov.org/erm/Pages/Sea-Turtle.aspx.

This quarterly newsletter published by Palm Beach County Environmental Resources Management highlight's the local environmental restoration and preservation efforts conducted in Palm Beach County located in Southeast Florida. There are wonderful places to visit here to get in touch with natural and visit the real Florida. For more information on the department and the work being done, visit pbcerm.com 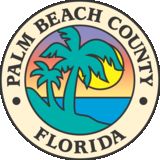