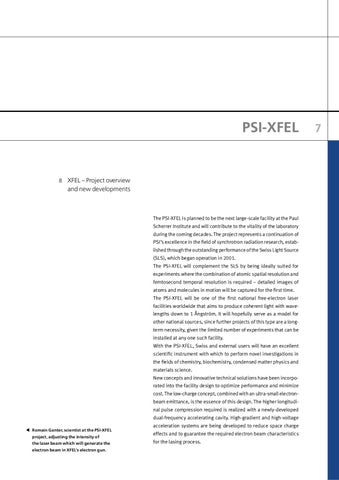 The PSI-XFEL is planned to be the next large-scale facility at the Paul Scherrer Institute and will contribute to the vitality of the laboratory during the coming decades. The project represents a continuation of PSI’s excellence in the field of synchrotron radiation research, established through the outstanding performance of the Swiss Light Source (SLS), which began operation in 2001. The PSI-XFEL will complement the SLS by being ideally suited for experiments where the combination of atomic spatial resolution and femtosecond temporal resolution is required – detailed images of atoms and molecules in motion will be captured for the first time. The PSI-XFEL will be one of the first national free-electron laser facilities worldwide that aims to produce coherent light with wavelengths down to 1 Ångström. It will hopefully serve as a model for other national sources, since further projects of this type are a longterm necessity, given the limited number of experiments that can be installed at any one such facility. With the PSI-XFEL, Swiss and external users will have an excellent scientific instrument with which to perform novel investigations in the fields of chemistry, biochemistry, condensed matter physics and materials science. New concepts and innovative technical solutions have been incorporated into the facility design to optimize performance and minimize cost. The low-charge concept, combined with an ultra-small electronbeam emittance, is the essence of this design. The higher longitudinal pulse compression required is realized with a newly-developed dual-frequency accelerating cavity. High-gradient and high-voltage Romain Ganter, scientist at the PSI-XFEL project, adjusting the intensity of the laser beam which will generate the electron beam in XFEL’s electron gun.

acceleration systems are being developed to reduce space charge effects and to guarantee the required electron beam characteristics for the lasing process.