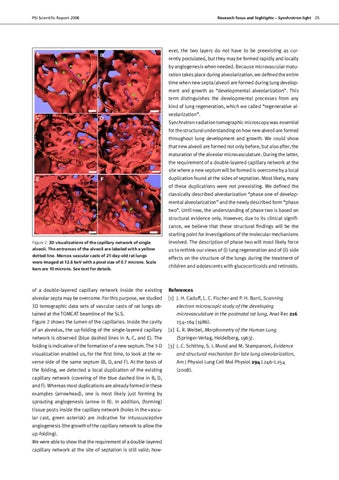 ever, the two layers do not have to be preexisting as currently postulated, but they may be formed rapidly and locally by angiogenesis when needed. Because microvascular maturation takes place during alveolarization, we defined the entire time when new septa/alveoli are formed during lung development and growth as “developmental alveolarization”. This term distinguishes the developmental processes from any kind of lung regeneration, which we called “regenerative alveolarization”. Synchrotron-radiation tomographic microscopy was essential for the structural understanding on how new alveoli are formed throughout lung development and growth. We could show that new alveoli are formed not only before, but also after, the maturation of the alveolar microvasculature. During the latter, the requirement of a double-layered capillary network at the site where a new septum will be formed is overcome by a local duplication found at the sides of septation. Most likely, many of these duplications were not preexisting. We defined the classically described alveolarization “phase one of developmental alveolarization” and the newly described form “phase two”. Until now, the understanding of phase two is based on structural evidence only. However, due to its clinical significance, we believe that these structural findings will be the starting point for investigations of the molecular mechanisms Figure 2: 3D visualizations of the capillary network of single

involved. The description of phase two will most likely force

alveoli. The entrances of the alveoli are labeled with a yellow

effects on the structure of the lungs during the treatment of

children and adolescents with glucocorticoids and retinoids.

of a double-layered capillary network inside the existing

alveolar septa may be overcome. For this purpose, we studied

electron microscopic study of the developing

tained at the TOMCAT beamline of the SLS.

Figure 2 shows the lumen of the capillaries. Inside the cavity of an alveolus, the up-folding of the single-layered capillary network is observed (blue dashed lines in A, C, and E). The folding is indicative of the formation of a new septum. The 3-D

visualization enabled us, for the first time, to look at the re-

verse side of the same septum (B, D, and F). At the basis of

the folding, we detected a local duplication of the existing