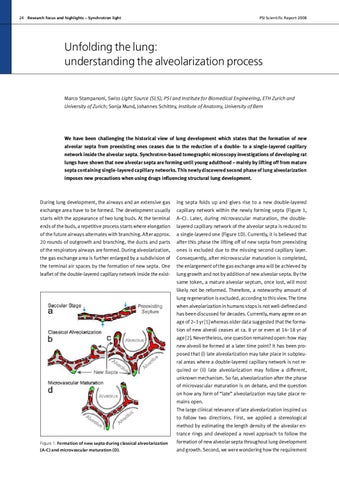 We have been challenging the historical view of lung development which states that the formation of new alveolar septa from preexisting ones ceases due to the reduction of a double- to a single-layered capillary network inside the alveolar septa. Synchrotron-based tomographic microscopy investigations of developing rat lungs have shown that new alveolar septa are forming until young adulthood – mainly by lifting off from mature septa containing single-layered capillary networks. This newly discovered second phase of lung alveolarization imposes new precautions when using drugs influencing structural lung development.

During lung development, the airways and an extensive gas

exchange area have to be formed. The development usually

starts with the appearance of two lung buds. At the terminal

ends of the buds, a repetitive process starts where elongation

layered capillary network of the alveolar septa is reduced to

of the future airways alternates with branching. After approx.

a single-layered one (Figure 1D). Currently, it is believed that

20 rounds of outgrowth and branching, the ducts and parts

after this phase the lifting off of new septa from preexisting

of the respiratory airways are formed. During alveolarization,

ones is excluded due to the missing second capillary layer.

the gas exchange area is further enlarged by a subdivision of

Consequently, after microvascular maturation is completed,

the terminal air spaces by the formation of new septa. One

the enlargement of the gas exchange area will be achieved by

leaflet of the double-layered capillary network inside the exist-

lung growth and not by addition of new alveolar septa. By the same token, a mature alveolar septum, once lost, will most likely not be reformed. Therefore, a noteworthy amount of lung regeneration is excluded, according to this view. The time when alveolarization in humans stops is not well-defined and has been discussed for decades. Currently, many agree on an age of 2–3 yr [1] whereas older data suggested that the formation of new alveoli ceases at ca. 8 yr or even at 16–18 yr of age [2]. Nevertheless, one question remained open: how may new alveoli be formed at a later time point? It has been proposed that (i) late alveolarization may take place in subpleural areas where a double-layered capillary network is not required or (ii) late alveolarization may follow a different, unknown mechanism. So far, alveolarization after the phase of microvascular maturation is on debate, and the question on how any form of “late” alveolarization may take place remains open. The large clinical relevance of late alveolarization inspired us to follow two directions. First, we applied a stereological method by estimating the length density of the alveolar entrance rings and developed a novel approach to follow the

and growth. Second, we were wondering how the requirement