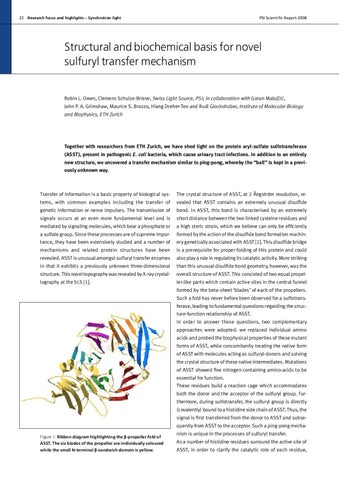 Together with researchers from ETH Zurich, we have shed light on the protein aryl-sulfate sulfotransferase (ASST), present in pathogenic E. coli bacteria, which cause urinary tract infections. In addition to an entirely new structure, we uncovered a transfer mechanism similar to ping-pong, whereby the “ball” is kept in a previously unknown way.

Transfer of information is a basic property of biological sys-

The crystal structure of ASST, at 2 Ångström resolution, re-

tems, with common examples including the transfer of

genetic information or nerve impulses. The transmission of

bond. In ASST, this bond is characterised by an extremely

signals occurs at an even more fundamental level and is

short distance between the two linked cysteine residues and

mediated by signaling molecules, which bear a phosphate or

a high steric strain, which we believe can only be efficiently

a sulfate group. Since these processes are of supreme impor-

formed by the action of the disulfide bond formation machin-

tance, they have been extensively studied and a number of

mechanisms and related protein structures have been

is a prerequisite for proper folding of this protein and could

in that it exhibits a previously unknown three-dimensional

than this unusual disulfide bond geometry, however, was the

structure. This novel topography was revealed by X-ray crystal-

overall structure of ASST. This consisted of two equal propel-

ler-like parts which contain active sites in the central funnel formed by the beta-sheet ‘blades’ of each of the propellers. Such a fold has never before been observed for a sulfotransferase, leading to fundamental questions regarding the structure-function relationship of ASST. In order to answer these questions, two complementary approaches were adopted: we replaced individual amino acids and probed the biophysical properties of these mutant forms of ASST, while concomitantly treating the native form of ASST with molecules acting as sulfuryl-donors and solving the crystal structure of these native intermediates. Mutations of ASST showed five nitrogen-containing amino-acids to be essential for function. These residues build a reaction cage which accommodates both the donor and the acceptor of the sulfuryl group. Furthermore, during sulfotransfer, the sulfuryl group is directly (covalently) bound to a histidine side chain of ASST. Thus, the signal is first transferred from the donor to ASST and subsequently from ASST to the acceptor. Such a ping-pong mecha-

nism is unique in the processes of sulfuryl transfer.

ASST. The six blades of the propeller are individually coloured

As a number of histidine residues surround the active site of

while the small N-terminal β-sandwich domain is yellow.

ASST, in order to clarify the catalytic role of each residue,