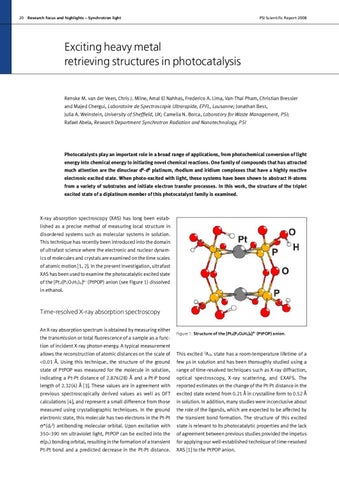 Photocatalysts play an important role in a broad range of applications, from photochemical conversion of light energy into chemical energy to initiating novel chemical reactions. One family of compounds that has attracted much attention are the dinuclear d8-d8 platinum, rhodium and iridium complexes that have a highly reactive electronic excited state. When photo-excited with light, these systems have been shown to abstract H-atoms from a variety of substrates and initiate electron transfer processes. In this work, the structure of the triplet excited state of a diplatinum member of this photocatalyst family is examined.

X-ray absorption spectroscopy (XAS) has long been established as a precise method of measuring local structure in disordered systems such as molecular systems in solution. This technique has recently been introduced into the domain of ultrafast science where the electronic and nuclear dynamics of molecules and crystals are examined on the time scales of atomic motion [1, 2]. In the present investigation, ultrafast XAS has been used to examine the photocatalytic excited state of the [Pt2(P2O5H2)4]4– (PtPOP) anion (see Figure 1) dissolved in ethanol.

tion of incident X-ray photon energy. A typical measurement allows the reconstruction of atomic distances on the scale of

This excited 3A2u state has a room-temperature lifetime of a

<0.01 Å. Using this technique, the structure of the ground

few μs in solution and has been thoroughly studied using a

state of PtPOP was measured for the molecule in solution,

range of time-resolved techniques such as X-ray diffraction,

calculations [4], and represent a small difference from those

in solution. In addition, many studies were inconclusive about

the role of the ligands, which are expected to be affected by

electronic state, this molecule has two electrons in the Pt-Pt

the transient bond formation. The structure of this excited

state is relevant to its photocatalytic properties and the lack

350–390 nm ultraviolet light, PtPOP can be excited into the

of agreement between previous studies provided the impetus

σ(pz) bonding orbital, resulting in the formation of a transient

for applying our well-established technique of time-resolved

Pt-Pt bond and a predicted decrease in the Pt-Pt distance.