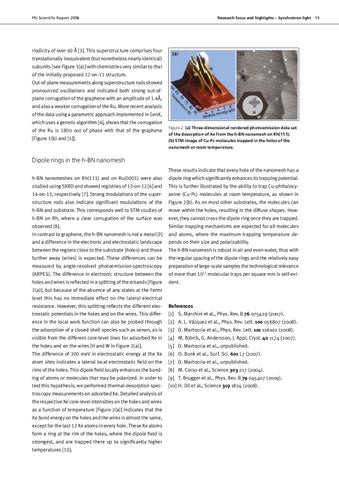 riodicity of over 60 Å [3]. This superstructure comprises four translationally inequivalent (but nonetheless nearly identical) subunits [see Figure 1(a)] with chemistries very similar to that of the initially proposed 12-on-11 structure. Out-of-plane measurements along superstructure rods showed pronounced oscillations and indicated both strong out-ofplane corrugation of the graphene with an amplitude of 1.4Å, and also a weaker corrugation of the Ru. More recent analysis of the data using a parametric approach implemented in GenX, which uses a genetic algorithm [4], shows that the corrugation of the Ru is 180o out of phase with that of the graphene [Figure 1(b) and [5]].

Figure 2: (a) Three-dimensional rendered photoemission data set of the desorption of Xe from the h-BN nanomesh on Rh(111); (b) STM image of Cu-Pc molecules trapped in the holes of the nanomesh at room temperature.

This is further illustrated by the ability to trap Cu-phthalocy-

anine (Cu-Pc) molecules at room temperature, as shown in

Figure 2(b). As on most other substrates, the molecules can

h-BN and substrate. This corresponds well to STM studies of

move within the holes, resulting in the diffuse shapes. How-

h-BN on Rh, where a clear corrugation of the surface was

ever, they cannot cross the dipole ring once they are trapped.

Similar trapping mechanisms are expected for all molecules

In contrast to graphene, the h-BN nanomesh is not a metal [9]

and atoms, where the maximum trapping temperature de-

and a difference in the electronic and electrostatic landscape

pends on their size and polarizability.

between the regions close to the substrate (holes) and those

The h-BN nanomesh is robust in air and even water, thus with

further away (wires) is expected. These differences can be

the regular spacing of the dipole rings and the relatively easy

(ARPES). The difference in electronic structure between the

2(a)], but because of the absence of any states at the Fermi level this has no immediate effect on the lateral electrical resistance. However, this splitting reflects the different elec-

trostatic potentials in the holes and on the wires. This differ-

ence in the local work function can also be probed through

the adsorption of a closed shell species such as xenon, as is

visible from the different core-level lines for adsorbed Xe in

The difference of 300 meV in electrostatic energy at the Xe

atom sites indicates a lateral local electrostatic field on the

rims of the holes. This dipole field locally enhances the bond-

ing of atoms or molecules that may be polarized. In order to

troscopy measurements on adsorbed Xe. Detailed analysis of the respective Xe core-level intensities on the holes and wires as a function of temperature [Figure 2(a)] indicates that the Xe bond energy on the holes and the wires is almost the same, except for the last 12 Xe atoms in every hole. These Xe atoms form a ring at the rim of the holes, where the dipole field is strongest, and are trapped there up to significantly higher temperatures [10].