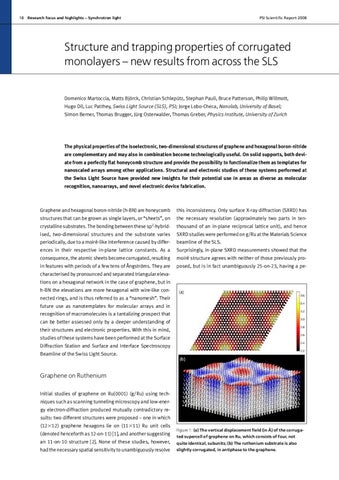 The physical properties of the isoelectronic, two-dimensional structures of graphene and hexagonal boron-nitride are complementary and may also in combination become technologically useful. On solid supports, both deviate from a perfectly flat honeycomb structure and provide the possibility to functionalize them as templates for nanoscaled arrays among other applications. Structural and electronic studies of these systems performed at the Swiss Light Source have provided new insights for their potential use in areas as diverse as molecular recognition, nanoarrays, and novel electronic device fabrication.

this inconsistency. Only surface X-ray diffraction (SXRD) has

structures that can be grown as single layers, or “sheets”, on

crystalline substrates. The bonding between these sp -hybrid-

thousand of an in-plane reciprocal lattice unit), and hence

SXRD studies were performed on g/Ru at the Materials Science

periodically, due to a moiré-like interference caused by differ-

beamline of the SLS.

ences in their respective in-plane lattice constants. As a

moiré structure agrees with neither of those previously pro-

in features with periods of a few tens of Ångströms. They are

characterised by pronounced and separated triangular elevations on a hexagonal network in the case of graphene, but in h-BN the elevations are more hexagonal with wire-like connected rings, and is thus referred to as a “nanomesh”. Their future use as nanotemplates for molecular arrays and in recognition of macromolecules is a tantalizing prospect that can be better assessed only by a deeper understanding of their structures and electronic properties. With this in mind, studies of these systems have been performed at the Surface Diffraction Station and Surface and Interface Spectroscopy Beamline of the Swiss Light Source.

Graphene on Ruthenium Initial studies of graphene on Ru(0001) (g/Ru) using techniques such as scanning tunneling microscopy and low-energy electron-diffraction produced mutually contradictory results: two different structures were proposed – one in which (1212) graphene hexagons lie on (1111) Ru unit cells (denoted henceforth as 12-on-11) [1], and another suggesting an 11-on-10 structure [2]. None of these studies, however, had the necessary spatial sensitivity to unambiguously resolve

Figure 1: (a) The vertical displacement field (in Å) of the corrugated supercell of graphene on Ru, which consists of four, not quite identical, subunits; (b) The ruthenium substrate is also slightly corrugated, in antiphase to the graphene.