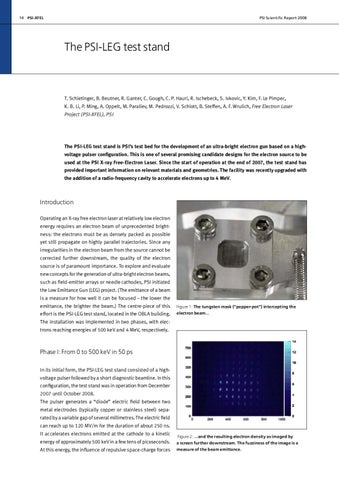 The PSI-LEG test stand is PSI’s test bed for the development of an ultra-bright electron gun based on a highvoltage pulser configuration. This is one of several promising candidate designs for the electron source to be used at the PSI X-ray Free-Electron Laser. Since the start of operation at the end of 2007, the test stand has provided important information on relevant materials and geometries. The facility was recently upgraded with the addition of a radio-frequency cavity to accelerate electrons up to 4 MeV.

Introduction Operating an X-ray free electron laser at relatively low electron energy requires an electron beam of unprecedented brightness: the electrons must be as densely packed as possible yet still propagate on highly parallel trajectories. Since any irregularities in the electron beam from the source cannot be corrected further downstream, the quality of the electron source is of paramount importance. To explore and evaluate new concepts for the generation of ultra-bright electron beams, such as field-emitter arrays or needle cathodes, PSI initiated the Low Emittance Gun (LEG) project. (The emittance of a beam is a measure for how well it can be focused – the lower the emittance, the brighter the beam.) The centre-piece of this

effort is the PSI-LEG test stand, located in the OBLA building.

The installation was implemented in two phases, with electrons reaching energies of 500 keV and 4 MeV, respectively.

Phase I: From 0 to 500 keV in 50 ps In its initial form, the PSI-LEG test stand consisted of a highvoltage pulser followed by a short diagnostic beamline. In this configuration, the test stand was in operation from December 2007 until October 2008. The pulser generates a “diode” electric field between two metal electrodes (typically copper or stainless steel) separated by a variable gap of several millimetres. The electric field can reach up to 120 MV/m for the duration of about 250 ns. It accelerates electrons emitted at the cathode to a kinetic

Figure 2: ...and the resulting electron density as imaged by

energy of approximately 500 keV in a few tens of picoseconds.

a screen further downstream. The fuzziness of the image is a

At this energy, the influence of repulsive space-charge forces

measure of the beam emittance.