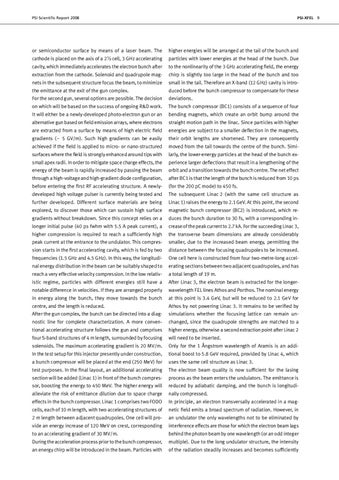 or semiconductor surface by means of a laser beam. The

cathode is placed on the axis of a 2Â˝ cell, 3 GHz accelerating

particles with lower energies at the head of the bunch. Due

cavity, which immediately accelerates the electron bunch after

to the nonlinearity of the 3 GHz accelerating field, the energy

extraction from the cathode. Solenoid and quadrupole mag-

nets in the subsequent structure focus the beam, to minimize

small in the tail. Therefore an X-band (12 GHz) cavity is intro-

the emittance at the exit of the gun complex.

duced before the bunch compressor to compensate for these

For the second gun, several options are possible. The decision

on which will be based on the success of ongoing R&D work.

The bunch compressor (BC1) consists of a sequence of four

bending magnets, which create an orbit bump around the

alternative gun based on field emission arrays, where electrons

straight motion path in the linac. Since particles with higher

are extracted from a surface by means of high electric field

energies are subject to a smaller deflection in the magnets,

gradients (~ 5 GV/m). Such high gradients can be easily

their orbit lengths are shortened. They are consequently

achieved if the field is applied to micro- or nano-structured

moved from the tail towards the centre of the bunch. Simi-

surfaces where the field is strongly enhanced around tips with

larly, the lower-energy particles at the head of the bunch ex-

perience larger deflections that result in a lengthening of the

energy of the beam is rapidly increased by passing the beam

orbit and a transition towards the bunch centre. The net effect

through a high-voltage and high-gradient diode configuration,

before entering the first RF accelerating structure. A newly-

developed high voltage pulser is currently being tested and

The subsequent Linac 2 (with the same cell structure as

Linac 1) raises the energy to 2.1 GeV. At this point, the second

explored, to discover those which can sustain high surface

magnetic bunch compressor (BC2) is introduced, which re-

gradients without breakdown. Since this concept relies on a

duces the bunch duration to 30 fs, with a corresponding in-

crease of the peak current to 2.7 kA. For the succeeding Linac 3,

higher compression is required to reach a sufficiently high

peak current at the entrance to the undulator. This compres-

smaller, due to the increased beam energy, permitting the

sion starts in the first accelerating cavity, which is fed by two

distance between the focusing quadrupoles to be increased.

One cell here is constructed from four two-metre-long accel-

nal energy distribution in the beam can be suitably shaped to

erating sections between two adjacent quadrupoles, and has

reach a very effective velocity compression. In the low relativ-

istic regime, particles with different energies still have a

After Linac 3, the electron beam is extracted for the longer-

notable difference in velocities. If they are arranged properly

in energy along the bunch, they move towards the bunch

centre, and the length is reduced.

Athos by not powering Linac 3. It remains to be verified by

After the gun complex, the bunch can be directed into a diag-

simulations whether the focusing lattice can remain un-

changed, since the quadrupole strengths are matched to a

will need to be inserted.

Only for the 1 Ă&#x2026;ngstrom wavelength of Aramis is an addi-

In the test setup for this injector presently under construction,

tional boost to 5.8 GeV required, provided by Linac 4, which

test purposes. In the final layout, an additional accelerating

The electron beam quality is now sufficient for the lasing

process as the beam enters the undulators. The emittance is

sor, boosting the energy to 450 MeV. The higher energy will

reduced by adiabatic damping, and the bunch is longitudi-

alleviate the risk of emittance dilution due to space charge

In principle, an electron transversally accelerated in a mag-

cells, each of 10 m length, with two accelerating structures of

netic field emits a broad spectrum of radiation. However, in

2 m length between adjacent quadrupoles. One cell will pro-

an undulator the only wavelengths not to be eliminated by

vide an energy increase of 120 MeV on crest, corresponding

interference effects are those for which the electron beam lags

to an accelerating gradient of 30 MV/m.

behind the photon beam by one wavelength (or an odd integer

During the acceleration process prior to the bunch compressor,

multiple). Due to the long undulator structure, the intensity

an energy chirp will be introduced in the beam. Particles with

of the radiation steadily increases and becomes sufficiently