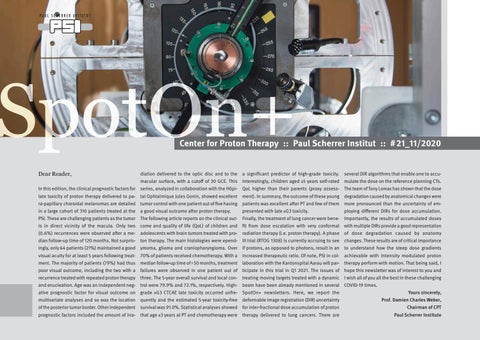 diation delivered to the optic disc and to the

a significant predictor of high-grade toxicity. several DIR algorithms that enable one to accu-

macular surface, with a cutoff of 30 GCE. This Interestingly, children aged ≥5 years self-rated mulate the dose on the reference planning CTs. In this edition, the clinical prognostic factors for

series, analyzed in collaboration with the Hôpi-

late toxicity of proton therapy delivered to pa- tal Ophtalmique Jules Gonin, showed excellent ment). In summary, the outcome of these young degradation caused by anatomical changes were ra-papillary choroidal melanomas are detailed tumor control with one patient out of five having

patients was excellent after PT and few of them

more pronounced than the uncertainty of em-

in a large cohort of 310 patients treated at the

PSI. These are challenging patients as the tumor

The following article reports on the clinical out-

Finally, the treatment of lung cancer were bene- Importantly, the results of accumulated doses

is in direct vicinity of the macula. Only two

(0.6%) recurrences were observed after a me-

of dose degradation caused by anatomy

changes. These results are of critical importance

ingly, only 64 patients (21%) maintained a good ymoma, glioma and craniopharyngioma. Over

if protons, as opposed to photons, result in an

to understand how the steep dose gradients

70% of patients received chemotherapy. With a

ment. The majority of patients (79%) had thus median follow-up time of > 50 months, treatment laboration with the Kantonspital Aarau will parpoor visual outcome, including the two with a

failures were observed in one patient out of ticipate in this trial in Q1 2021. The issues of hope this newsletter was of interest to you and

therapy perform with motion. That being said, I

treating moving targets treated with a dynamic I wish all of you all the best in these challenging beam have been already mentioned in several COVID-19 times. SpotOn+ newsletters. Here, we report the

multivariate analyses and so was the location

of the posterior tumor border. Other independent

that age ≤3 years at PT and chemotherapy were

therapy delivered to lung cancers. There are

patients, treated between 1984 and 2005, could be included in the analyses. All patients under-

to decrease the risk of a local recurrence through

geographical miss. However, the indication for

and delivered at the Paul Scherrer Institute (PSI,

conservative PT of pcM is still challenged, be-

cause irradiation of the optic disc is correlated and a custom-modeled head holder for immowith a higher risk of complications as a result of bilization. A total dose of 54.5 Gy, corresponding direct neuropathic effects and a radiation-in-

Parapapillary choroidal melanoma (left eye) maintaining useful vision following proton therapy. a: Panoramic fundus photo in a 71-year-old female at initial presentation with loss of VA to 0.6 decimal related to a secondary macular detachment. c: Eleven years after radiation therapy, the tumor borders are under control on panoramic fundus photography, with some lipid exudates close to the macular border.

duced vasculopathy, leading to loss of useful on 4 consecutive days. Follow-up examinations vision and even secondary enucleation. In our took place at HOJG, Lausanne.

outcome in multivariate analyses. The location the macula (P < 0.001), rather than the optic disc

of the posterior tumor border was strongly cor-

apy to all other patients.

Out of 310 pcM patients who had received PT,

whether the tumor abutted the optic disc (GVO

treatment and were therefore allocated to the

P < 0.001), or at a closer distance to the fovea dium-sized pcM patients, one in five maintained

related with long-term visual outcome. That is,

Conclusions Out of 310 successfully treated small- and me-

lowing PT was considered as a ‘good long-term’

patients presented a recurrence at 8 and 9 years ingly, only the tumor location relative to the fo- dictors for maintaining a useful long-term vision

following PT and were treated with a second PT,

vea remained significant with a distance of less were older age, tumor proximity to the fovea,

ocular and tumor characteristics at baseline

followed in the latter case by a secondary enu-

than 0.6 mm from the fovea resulting as an in-

and the volume of the optic disc and macula

receiving at least 30 CGE, the latter being the

tients with a good long-term VA, allocated to the with no significant statistical difference between

ysis identified both the % of irradiation delivered

“good visual outcome” (GVO) group, with those the two groups (P = 0.053). The GVO group was to the optic disc and to the macular surface as The results of this collaboration project between of the remaining patients, representing the on average five years younger, and older age at two independent negative predictors for main-

“poor visual outcome” (PVO) group. In total, 310 the time of PT was identified as an independent taining long-term vision, it also highlighted the

strated over CRT, but comprehensive long-term

data for PBS use in CBTs is scarce. The aim of this

glioblastoma within the high-dose region, 8 and

tially impact well-being, quality of life (QoL), and QoL in a large cohort of CBTs treated with PBS-PT ies only for patients ≤4 years, proxies and patients 10 years after PT, respectively. A third patient was health of children/adolescents with brain tumors and to assess prognostic factors related to these for patients ≥5 years) were descriptively analyzed.

Median age at diagnosis and at PT start were 3.1 lower social functioning and cognition after PT

than at baseline, but near-normal long-term

chological outcomes after PT have been demon-

ities were documented The main histologies were ependymoma (n = 88; weekly during PT. Doc-

before and after PT in children ≤4 years.

tients received chemotherapy; in 38 (17.2%) cases this large cohort with long-term FU and compares

tained by our study and Gy (relative biological effectiveness) (range, 18.0-

The outcome of CBTs was excellent after PBS in

64.8). Median follow-up was 51 months (range, ent predictor for distant brain failure and for

death, but long-term survivors diagnosed with

ease-free (DFS), and Treatment failure was observed in 74 of 221

(33.5%) patients. Isolated local failure was the

open source algorithms from plastimatch (Demon and B-spline), and four were commercial algorithms implemented in clinical software: one from Mirada, one from Velocity and two from Raystation

(Anaconda and Morpheus). The recalculated changes was more pronounced than the uncer-

to the planning CT using the corresponding six mulation. The averaged results of accumulated

omy. However, the variations in the accumulated

pared to the initial planned dose.

dose with DIRs can be substantial, so the use of

dose degradations. This makes recalculation or Proton treatment plans with 66 Gy-RBE to the adaption necessary. For a comprehensive evalu-

only one DIR algorithm for dose accumulation is not advisable.

ation, report and review, the applied treatment seven NSCLC patients. For each patient, nine An evaluation of the localization of dose differdose can be accumulated on the reference (plan-

The results of this work have been recently pub-

ning) CT using deformable image registration rigidly to the planning CT. All CTs were acquired between the DIRs were located in the regions of (DIR). Nowadays, many clinically used treatment in visually guided deep-inspiration breath-hold. the dose gradient (Figure). However, also within Therefore, as a simplification, the dose was re-

the tumor differences of up to 20% were observed

mented. Unfortunately, different clinically used calculated on each CT as if it was delivered in a

just depending on the choice of the DIR algorithm

rithms are hard to

all patients caused by

of these DIR un-

The variations due to

known. Therefore, we have investigated differences

8.7%. A good agreement between the dose