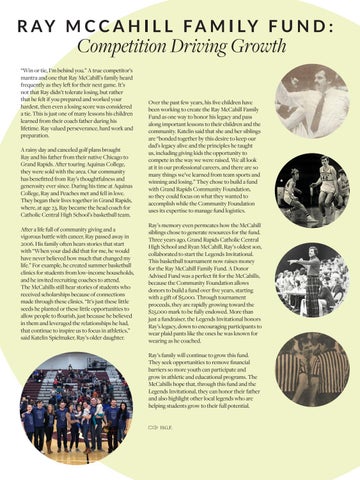 Competition Driving Growth “Win or tie, I’m behind you.” A true competitor’s mantra and one that Ray McCahill’s family heard frequently as they left for their next game. It’s not that Ray didn’t tolerate losing, but rather that he felt if you prepared and worked your hardest, then even a losing score was considered a tie. This is just one of many lessons his children learned from their coach father during his lifetime. Ray valued perseverance, hard work and preparation. A rainy day and canceled golf plans brought Ray and his father from their native Chicago to Grand Rapids. After touring Aquinas College, they were sold with the area. Our community has benefitted from Ray’s thoughtfulness and generosity ever since. During his time at Aquinas College, Ray and Peaches met and fell in love. They began their lives together in Grand Rapids, where, at age 23, Ray became the head coach for Catholic Central High School’s basketball team. After a life full of community giving and a vigorous battle with cancer, Ray passed away in 2006. His family often hears stories that start with “When your dad did that for me, he would have never believed how much that changed my life.” For example, he created summer basketball clinics for students from low-income households, and he invited recruiting coaches to attend. The McCahills still hear stories of students who received scholarships because of connections made through these clinics. “It’s just these little seeds he planted or these little opportunities to allow people to flourish, just because he believed in them and leveraged the relationships he had, that continue to inspire us to focus in athletics,” said Katelin Spielmaker, Ray’s older daughter.

Over the past few years, his five children have been working to create the Ray McCahill Family Fund as one way to honor his legacy and pass along important lessons to their children and the community. Katelin said that she and her siblings are “bonded together by this desire to keep our dad’s legacy alive and the principles he taught us, including giving kids the opportunity to compete in the way we were raised. We all look at it in our professional careers, and there are so many things we’ve learned from team sports and winning and losing.” They chose to build a fund with Grand Rapids Community Foundation, so they could focus on what they wanted to accomplish while the Community Foundation uses its expertise to manage fund logistics. Ray’s memory even permeates how the McCahill siblings chose to generate resources for the fund. Three years ago, Grand Rapids Catholic Central High School and Ryan McCahill, Ray’s oldest son, collaborated to start the Legends Invitational. This basketball tournament now raises money for the Ray McCahill Family Fund. A Donor Advised Fund was a perfect fit for the McCahills, because the Community Foundation allows donors to build a fund over five years, starting with a gift of $5,000. Through tournament proceeds, they are rapidly growing toward the $25,000 mark to be fully endowed. More than just a fundraiser, the Legends Invitational honors Ray’s legacy, down to encouraging participants to wear plaid pants like the ones he was known for wearing as he coached. Ray’s family will continue to grow this fund. They seek opportunities to remove financial barriers so more youth can participate and grow in athletic and educational programs. The McCahills hope that, through this fund and the Legends Invitational, they can honor their father and also highlight other local legends who are helping students grow to their full potential. H.G.F. 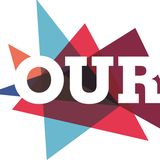