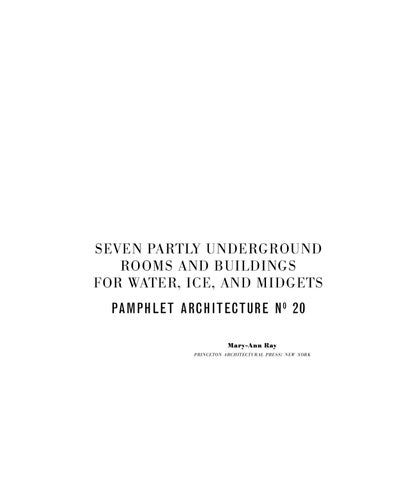 a note to the reader

A Pair of City Architectures, Hovering Thresholds, Duomo and Its Obverse, and Occupied Edges Half Monolith/Half ‘Manylith,’ Up and Down Excavation Looped Space, and Two Travelers in the Well

Tom b of the Corn ice

notes to the traveler: location for the buildings and rooms

sources for the illustrations in the text

every window from one window a travelerâ&amp;#x20AC;&amp;#x2122;s position in the well

looped space a building without rooms or destinations

The construction of the Pozzo di San Patrizio, or St. Patrickâ&amp;#x20AC;&amp;#x2122;s Well, was instigated by Pope Clement VII following the sack of Rome in 1527. Clement, who took refuge in the city of Orvieto, northeast of Rome, commissioned the well to supply this hill town with water during times of siege. Antonio da Sangallo the Younger was the initial architect, and the architecture of the well can be attributed to him. Work was finished under Paul III in 1543 and a vatican was supervised by Giovanni Battista da Cortona and Simone Mosca manuscript (a Florentine architect and sculptor). St. Patrick is associated with the well because of its resemblance to a natural cave formation on an Irish island in the lake of Dearg. Next to a plummeting chasm in the cave, St. Patrick would go to pray.

entrance to the well

a pair of city architectures, hovering thresholds, duomo and its obverse, and occu pied ed ges Set into the city of Orvieto, where life moves back and forth across the horizontal surface of the streets and piazzas, are two distinct architectures perpendicular to the horizontal plane. The Italian Gothic cathedral or Duomo rises vertically above the town from the central piazza. It is a magical building full of light and illusion, where alabaster thresholds induce closed doors to hover over glowing bands of light. The Duomo is banded abstractly in greenish-black and white stone, with duomo a thin vertical slice of facade gilt with gold-plated mosaic. As an obverse to the Duomo, the well sits at the cliff â&amp;#x20AC;&amp;#x2122;s edge on the periphery of town. Instead of rising up from the ground surface, it begins at the ground and drops down into it. The well is an anti-illusionistic space, and is not an occupied single volume like the Duomo. Instead, it is a strongly physical construction composed of the repetitive elements of a superimposed circulation system that does not allow occupation at the center, but only within the edges.

half monolith/half ‘manylith,’ up and down excavation The well was built close to the eastern edge of the city’s cliff, adjacent to the ruins of an Etruscan Acropolis that overlooked the city. The volcanic tufa bedrock was broken through to reach a living vein of water at about 54.5 meters below the land surface. At approximately mid-depth, the tufa layer gave way to successive strata of Tertiary clays and silts. Construction of the walls within the tufa layer was subtractive, and the walls were carved from the monolithic surfaces of the tufa itself. Below the tufa layer, retaining walls of many brick and tufa blocks were built to hold back the soft earth. The construction of the well, which at first glance appears to be uniform, is actually half monolithic and half “manylithic.”

plan and elevation of the well

section of the well

One nineteenth-century theory (based on rumors passed down through generations) for how earth was removed from the hill is that work commenced from the top and from the side. Quarrymen may have dug a short lateral shaft into the cliffside near the lowest level of the dry well shaft so that excavation could occur from the top down, using gravity to do the work, as well as more conventionally digging out from the bottom up. Thus it was a simultaneous up and down excavation.

Com position of Architecture: Looped Space, E mblematic Plan, and Two Travelers in the Well The occupiable space of the well is its circulation. The well is a building almost without space, without rooms, and without destinations. Each circulation path, entered at ground level, leads back, in a complete loop, to its point of beginning, at which point the paths start up all over again. The spatial composition of the well is structured by two concentric cylinders. The inner cylinder encloses the light well shaft and is the stepped continuous and unbroken for almost 60 ramps

caretaker of the well

meters. The outer cylinder holds two superimposed, independent, and noncommunicating stepped helical ramps. While the plan is as flat and emblematic as a rubber stamp graphic, the section gives way to a complex spatial labyrinth. The ramps are entered from above ground by separate doors, one facing north, the other south. The paths of the two ramps cross only at one point, at the bridge crossing the bottom of the well. This circulation system was invented to permit a continuous single clockwise path of horses to enter, descend, load up with water, ascend, and exit the well without making a sharp turn or running into a fellow animal.

Cipriani, G.B. “Pozzo di Orvieto.” Ferraioli II, 740 (int 9), Vatican Library, 1808. From the Ferraioli library, now in the collection of the Vatican library, this manuscript can be accessed with the call number of Ferraioli II, 740 (int 9). This manuscript contains four nineteenth-century plates: I Plan and elevation; II Section through the ramps; III Section through the center; IV Shadowed section details through the ramps and the center. It also contains a brief one-page description of the history and physical qualities of the well. Luzi, Ludovico. Descrizione del Duomo d’Orvieto e del Pozzo Volgarmente detto di San Patrizio. Orvieto and Pompeii, 1844. Orvieto. Italia Artistica, no. 83. N.p., n.d. An early guide-book account of the well. Pennacchi, Francesco. Cenni Storici e Guida di Orvieto. Orvieto: Tip. comunale Tosini, 1873. Another early guide book account of the well. Perali, Pericle. Orvieto: note storiche di topografia e d’arte dalle origini al 1800. Rome: Multigrafica, 1979. A historical description of Antonio da Sangallo the Younger’s involvement as architect for the well and other building projects in Orvieto. Perali quotes an enigmatic seventeenth-century sonnet written by the Tuscan poet Francesco Ghezzi that begins something like this: “Two large serpents wrapped together, standing inside the city, not in the forest, go underground with their two tails then emerge above ground with only one head.”

the city found by subtraction, built in reverse

tomb of the cornice cerveteri

perpendicular to the horizontal threshold unenforced perspective/bellows of stone

parallel to the horizontal threshold seamless space machined from geology

The latest in the Pamphlet Architecture series, Seven Partly Underground Rooms and Buildings investigates unusual spaces in Italy, ranging from a honeycombed and mazelike series of rooms and stairs for midgets, to the dining chambers of a Pompeiian estate, to a half-buried sphere that serves as a place for ice storage. Ray reveals these quixotic spaces through constructed drawings, collaged photographs, and insightful text. 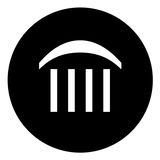