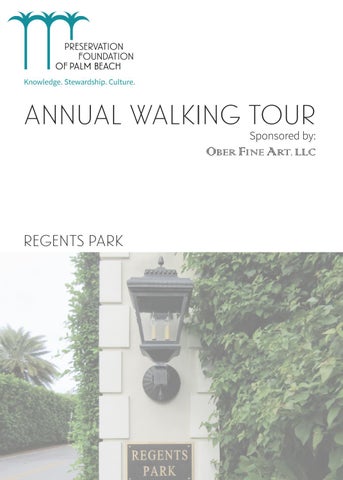 Thank you The Preservation Foundation of Palm Beach wishes to thank David Ober for his generosity in sponsoring the 2017 Walking Tour. A note of appreciation is extended to the homeowners who have graciously opened their homes for the tour.

regents park This cohesive historic district features five houses surrounding an oval green space built from 1958 to 1959. The development was designed and built by architect Clarence Mack; who took on numerous roles as the architect, builder, and developer. Regents Park became the first subdivision in Palm Beach with a distinct design that was designed, built, and landscaped by one architect. Mack’s vision was to create a neighborhood with a distinct architectural style that was unified and created an upscale ambiance to attract buyers. The planned development is distinguished in its Regency architecture that was inspired by the 19th century Regency style of England. Mack perfected the style to Palm Beach thus creating “Palm Beach Regency.” Regency architecture developed out of the Georgian architectural style during the 19th century during the Prince Regents thirty-year reign in England.

The style harkens back to classical forms and details of Greek and Roman architecture, and the subsequent revival styles perfected by Andrea Palladio. Regency architecture is distinguishable by clean lines and a simplified elegance that features a symmetrical faรงade built with a smooth stucco exterior. The sense of tradition is seen in the use of classical moldings, columns, pediments, porticos, and arches accented with keystones. Many of the decorative items such as the urns and statues on the rooflines were added at a later date.

100 Regents Park road 1958 | Clarence Mack | Designated 5/13/2015 On the northeast side of the planned development resides the first Regency style home. The first four homes were built of a wood framed construction with a hollow tile veneer surfaced with stucco. The elegant main entrance features simple columns that support a triangular pediment. The two-car garage placed in the front of the house emphasizes the importance of the automobile in the design of the house. The six-over-six sash windows provide symmetry to the faรงade. In 1962, a detached pool house and swimming pool were added by Wyeth, King, and Johnson. In 1969 there was a 368 sq. foot addition in the center bay of the South Faรงade. The original owners of the house were Arthur and Mary Hill who spent 27 winter seasons at the house as prominent members of Palm Beach Society. The Hills also had homes in Washington DC and Montana where they spent time in the offseason.

200 regents park Road 1958 | Clarence Mack | Designated 5/13/2015 On the southeast side of the planned development resides 100 Regents Park Road twin house. The mirror image of the house across the street, 200 Regents Park differs in that the windows have an addition of shutters, and a third window centered above the garage. The fanlight in the main entrance is the focal point of the entrance way. In 1966, an addition by Wyeth, King and Johnson was constructed on the south faรงade behind the garage in concrete block with a stucco finish. In 1986, a loggia was also constructed on the south faรงade of the residence. The original owners of the house were George A. and Ethel S. Garrett who spent 25 winter season at the house. Mr. Garrett was the US Ambassador to Ireland from 1947 to 1951.

300 Regents Park Road 1958 | Clarence Mack | Designated 5/13/2015 On the northwest side of the planned development is one of the more decorative houses in Regents Park. The main entrance is a parapet over a portico design that is supported by columns with Ionic capitals. Originally Mack had planned for a pediment, but then worried that was creating too much duplication and similarity with the other property development across the way so he altered his design. In 2013, four urns were added to the top of the balustrade. The three bay entryway is flanked by nine-over-nine sash windows that are replicated throughout the faรงade to emphasize the symmetry of the design. The original owners of the house were Alfred and Louise Cowles who spent 15 winter seasons at the house. Mr. Cowles grandfather was the founder of the Chicago Tribune.

400 regents park road 1959 | Clarence Mack | Designated 5/13/2015 On the southwest side of the planned development is the last house that was constructed in Regents Park, and acted as Mackâ&#x20AC;&#x2122;s personal residence. The rear of the residence faces Lake Worth, and is of one story construction with two story elements that are accessible by separate staircases. The main entry features a triangular pediment supported by columns with Ionic capitals. The central portico contains three bays with the entryway and arched nine-over-nine sashed windows. A 2010 addition expanded the residence into an â&#x20AC;&#x153;L-shape.â&#x20AC;?

500 Regents park road 1958 | Clarence Mack | Designated 5/13/2015 On the west and terminating vista of Regents Park Road is the central house. This the only residence on the block constructed entirely of concrete block and surfaced with smooth stucco. The main entryway columns are simple and slender and support the triangular pediment that rises above the structureâ&#x20AC;&#x2122;s flat roof. The entryway door and fanlight are flanked by four-over-four sash windows. The projecting garage bays are located at each end of the main faĂ§ade. In 1960, a loggia addition was added to the rear of the property. The original owners of the house were Mr. and Mrs. Irving Jacob Reuter who spent 9 winter seasons at the house. Mr. Reuter was in the automobile industry and was one of the ten original investors in the General Motors Investment Company.

About the Architect Clarence Mack (1888 - 1982) Clarence Mack moved to Palm Beach in 1935 during the Post-Depression Boom Era. Prior to his arrival, he built high-end houses in Ohio and Michigan. He received his Florida architectural license in 1936, and acted as the architect and contractor. Mack became a developer; he would buy empty lots and build spec houses to great success. In the 1940s, Mack decided he needed a signature style for his homes, and took inspiration from the English Regency Style. The Regency style was a success, and he built three Regency homes in the estate section prior to the development of Regents Park. After Regents Park, he went on to develop a similar neighborhood titled Parc Monceau. Mack lived at 400 Regents Park Road after its completion from 1961 to 1981, and passed away at the age of 93 in 1982.

The Preservation Foundation of Palm Beach is dedicated to preserving the architectural and cultural heritage and the unique scenic quality of the Town of Palm Beach. Through advocacy initiatives, educational programs, architectural resources, and cultural events, the Foundation’s goal is to encourage the community to learn about and save the historic sites that truly make Palm Beach special. Over the past 40 years, the Preservation Foundation has undertaken numerous projects throughout the island that protect the heritage and enhance the beauty of Palm Beach. Millions of dollars of have been raised to restore historic resources like Sea Gull Cottage, Town Hall, and Bradley Park. Projects such as Pan’s Garden have fostered a deeper appreciation for the island’s botanical heritage. Along with special exhibitions and publications that advance scholarship in the history of Palm Beach, the Preservation Foundation offers educational programs that serve 6,000 students annually. 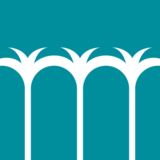