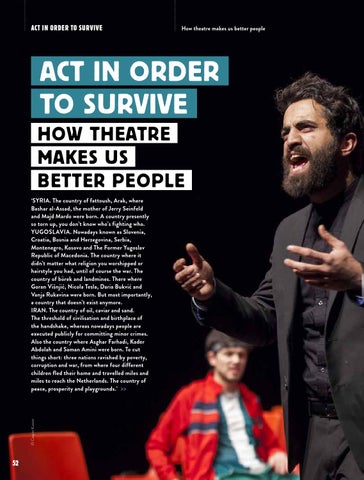 ACT IN ORDER TO SURVIVE

How theatre makes us better people

ACT IN ORDER TO SURVIVE HOW THEATRE MAKES US BETTER PEOPLE

‘SYRIA. The country of fattoush, Arak, where Bashar al-Assad, the mother of Jerry Seinfeld and Majd Mardo were born. A country presently so torn up, you don’t know who’s fighting who. YUGOSLAVIA. Nowadays known as Slovenia, Croatia, Bosnia and Herzegovina, Serbia, Montenegro, Kosovo and The Former Yugoslav Republic of Macedonia. The country where it didn’t matter what religion you worshipped or hairstyle you had, until of course the war. The country of börek and landmines. There where Goran Višnjić, Nicola Tesla, Daria Bukvić and Vanja Rukavina were born. But most importantly, a country that doesn’t exist anymore. IRAN. The country of oil, caviar and sand. The threshold of civilisation and birthplace of the handshake, whereas nowadays people are executed publicly for committing minor crimes. Also the country where Asghar Farhadi, Kader Abdolah and Saman Amini were born. To cut things short: three nations ravished by poverty, corruption and war, from where four different children fled their home and travelled miles and miles to reach the Netherlands. The country of peace, prosperity and playgrounds.’ &gt;&gt;

New Amsterdam is an in-depth extension of the online platforms stedenintransitie.nl and citiesintransition.eu, where we gather and connect people that make the city. City Makers we call them, an honorary title. They are the heart of the stories about new initiatives, testing grounds, city labs and creative breeding grounds in cities throughout The Netherlands and Europe. 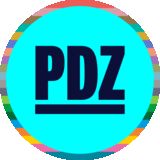