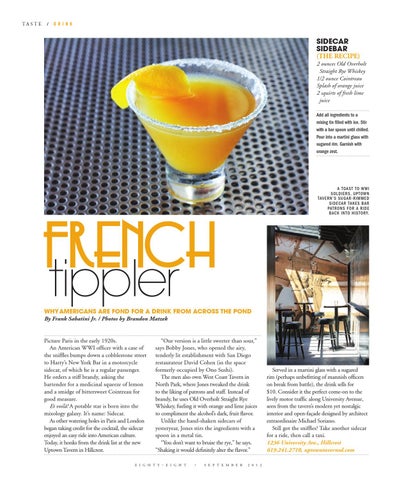 Why Americans are fond for a drink from across the pond By Frank Sabatini Jr. / Photos by Brandon Matzek Picture Paris in the early 1920s. An American WWI officer with a case of the sniffles bumps down a cobblestone street to Harry’s New York Bar in a motorcycle sidecar, of which he is a regular passenger. He orders a stiff brandy, asking the bartender for a medicinal squeeze of lemon and a smidge of bittersweet Cointreau for good measure. Et voilà! A potable star is born into the mixology galaxy. It’s name: Sidecar. As other watering holes in Paris and London began taking credit for the cocktail, the sidecar enjoyed an easy ride into American culture. Today, it honks from the drink list at the new Uptown Tavern in Hillcrest.

“Our version is a little sweeter than sour,” says Bobby Jones, who opened the airy, tenderly lit establishment with San Diego restaurateur David Cohen (in the space formerly occupied by Ono Sushi). The men also own West Coast Tavern in North Park, where Jones tweaked the drink to the liking of patrons and staff. Instead of brandy, he uses Old Overholt Straight Rye Whiskey, fueling it with orange and lime juices to compliment the alcohol’s dark, fruit flavor. Unlike the hand-shaken sidecars of yesteryear, Jones stirs the ingredients with a spoon in a metal tin. “You don’t want to bruise the rye,” he says. “Shaking it would definitely alter the flavor.”

Served in a martini glass with a sugared rim (perhaps unbefitting of mannish officers on break from battle), the drink sells for $10. Consider it the perfect come-on to the lively motor traffic along University Avenue, seen from the tavern’s modern yet nostalgic interior and open-façade designed by architect extraordinaire Michael Soriano. Still got the sniffles? Take another sidecar for a ride, then call a taxi. 1236 University Ave., Hillcrest 619.241.2710, uptowntavernsd.com