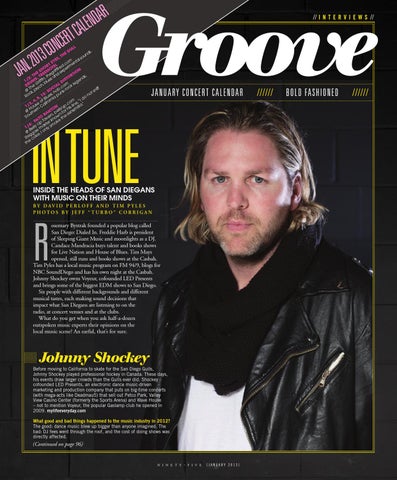 osemary Bystrak founded a popular blog called San Diego: Dialed In. Freddie Harb is president of Sleeping Giant Music and moonlights as a DJ. Candace Mandracia buys talent and books shows for Live Nation and House of Blues. Tim Mays opened, still runs and books shows at the Casbah. Tim Pyles has a local music program on FM 94/9, blogs for NBC SoundDiego and has his own night at the Casbah. Johnny Shockey owns Voyeur, cofounded LED Presents and brings some of the biggest EDM shows to San Diego. Six people with different backgrounds and different musical tastes, each making sound decisions that impact what San Diegans are listening to on the radio, at concert venues and at the clubs. What do you get when you ask half-a-dozen outspoken music experts their opinions on the local music scene? An earful, that’s for sure.

Johnny Shockey Before moving to California to skate for the San Diego Gulls, Johnny Shockey played professional hockey in Canada. These days, his events draw larger crowds than the Gulls ever did. Shockey cofounded LED Presents, an electronic dance music-driven marketing and production company that puts on big-time concerts (with mega-acts like Deadmau5) that sell out Petco Park, Valley View Casino Center (formerly the Sports Arena) and Wave House – not to mention Voyeur, the popular Gaslamp club he opened in 2009. mylifeeveryday.com What good and bad things happened to the music industry in 2012? The good: dance music blew up bigger than anyone imagined. The bad: DJ fees went through the roof, and the cost of doing shows was directly affected.