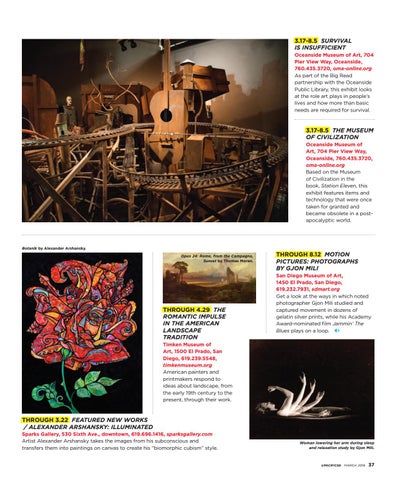 3.17-8.5 SURVIVAL IS INSUFFICIENT Oceanside Museum of Art, 704 Pier View Way, Oceanside, 760.435.3720, oma-online.org As part of the Big Read partnership with the Oceanside Public Library, this exhibit looks at the role art plays in people’s lives and how more than basic needs are required for survival.

3.17-8.5 THE MUSEUM OF CIVILIZATION Oceanside Museum of Art, 704 Pier View Way, Oceanside, 760.435.3720, oma-online.org Based on the Museum of Civilization in the book, Station Eleven, this exhibit features items and technology that were once taken for granted and became obsolete in a postapocalyptic world.

Botanik by Alexander Arshansky. Opus 24: Rome, from the Campagna, Sunset by Thomas Moran.

THROUGH 4.29 THE ROMANTIC IMPULSE IN THE AMERICAN LANDSCAPE TRADITION

THROUGH 8.12 MOTION PICTURES: PHOTOGRAPHS BY GJON MILI San Diego Museum of Art, 1450 El Prado, San Diego, 619.232.7931, sdmart.org Get a look at the ways in which noted photographer Gjon Mili studied and captured movement in dozens of gelatin silver prints, while his Academy Award-nominated film Jammin’ The Blues plays on a loop.

Timken Museum of Art, 1500 El Prado, San Diego, 619.239.5548, timkenmuseum.org American painters and printmakers respond to ideas about landscape, from the early 19th century to the present, through their work.

Woman lowering her arm during sleep and relaxation study by Gjon Mili.