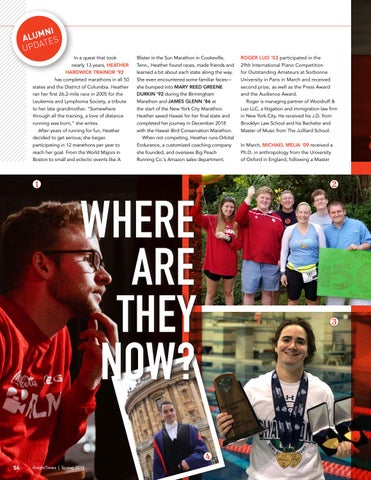 NI M U L A ATE S D P U In a quest that took nearly 13 years, HEATHER HARDWICK TRAINOR ’92 has completed marathons in all 50 states and the District of Columbia. Heather ran her first 26.2-mile race in 2005 for the Leukemia and Lymphoma Society, a tribute to her late grandmother. “Somewhere through all the training, a love of distance running was born,” she writes. After years of running for fun, Heather decided to get serious; she began participating in 12 marathons per year to reach her goal. From the World Majors in Boston to small and eclectic events like A

Blister in the Sun Marathon in Cookeville, Tenn., Heather found races, made friends and learned a bit about each state along the way. She even encountered some familiar faces— she bumped into MARY REED GREENE DURKIN ’92 during the Birmingham Marathon and JAMES GLENN ’86 at the start of the New York City Marathon. Heather saved Hawaii for her final state and completed her journey in December 2018 with the Hawaii Bird Conservation Marathon. When not competing, Heather runs Orbital Endurance, a customized coaching company she founded, and oversees Big Peach Running Co.’s Amazon sales department.

ROGER LUO ’03 participated in the 29th International Piano Competition for Outstanding Amateurs at Sorbonne University in Paris in March and received second prize, as well as the Press Award and the Audience Award. Roger is managing partner of Woodruff & Luo LLC, a litigation and immigration law firm in New York City. He received his J.D. from Brooklyn Law School and his Bachelor and Master of Music from The Juilliard School. In March, MICHAEL MELIA ’09 received a Ph.D. in anthropology from the University of Oxford in England, following a Master 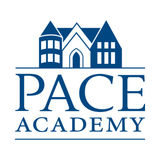