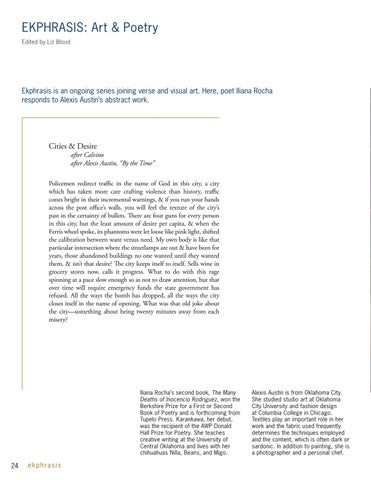 after Calvino after Alexis Austin, “By the Time”

Policemen redirect traffic in the name of God in this city, a city which has taken more care crafting violence than history, traffic cones bright in their incremental warnings, & if you run your hands across the post office’s walls, you will feel the texture of the city’s past in the certainty of bullets. There are four guns for every person in this city, but the least amount of desire per capita, & when the Ferris wheel spoke, its phantoms were let loose like pink light, shifted the calibration between want versus need. My own body is like that particular intersection where the streetlamps are out & have been for years, those abandoned buildings no one wanted until they wanted them, & isn’t that desire? The city keeps itself to itself. Sells wine in grocery stores now, calls it progress. What to do with this rage spinning at a pace slow enough so as not to draw attention, but that over time will require emergency funds the state government has refused. All the ways the bomb has dropped, all the ways the city closes itself in the name of opening. What was that old joke about the city—something about being twenty minutes away from each misery?

Iliana Rocha’s second book, The Many Deaths of Inocencio Rodriguez, won the Berkshire Prize for a First or Second Book of Poetry and is forthcoming from Tupelo Press. Karankawa, her debut, was the recipient of the AWP Donald Hall Prize for Poetry. She teaches creative writing at the University of Central Oklahoma and lives with her chihuahuas Nilla, Beans, and Migo.

Alexis Austin is from Oklahoma City. She studied studio art at Oklahoma City University and fashion design at Columbia College in Chicago. Textiles play an important role in her work and the fabric used frequently determines the techniques employed and the content, which is often dark or sardonic. In addition to painting, she is a photographer and a personal chef.