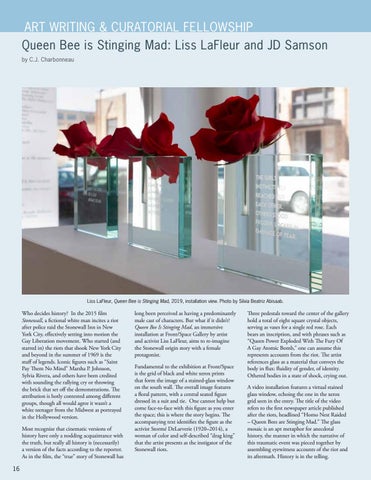 Who decides history? In the 2015 film Stonewall, a fictional white man incites a riot after police raid the Stonewall Inn in New York City, effectively setting into motion the Gay Liberation movement. Who started (and starred in) the riots that shook New York City and beyond in the summer of 1969 is the stuff of legends. Iconic figures such as “Saint Pay Them No Mind” Marsha P. Johnson, Sylvia Rivera, and others have been credited with sounding the rallying cry or throwing the brick that set off the demonstrations. The attribution is hotly contested among different groups, though all would agree it wasn’t a white teenager from the Midwest as portrayed in the Hollywood version. Most recognize that cinematic versions of history have only a nodding acquaintance with the truth, but really all history is (necessarily) a version of the facts according to the reporter. As in the film, the “true” story of Stonewall has

long been perceived as having a predominantly male cast of characters. But what if it didn’t? Queen Bee Is Stinging Mad, an immersive installation at Front/Space Gallery by artist and activist Liss LaFleur, aims to re-imagine the Stonewall origin story with a female protagonist. Fundamental to the exhibition at Front/Space is the grid of black and white xerox prints that form the image of a stained-glass window on the south wall. The overall image features a floral pattern, with a central seated figure dressed in a suit and tie. One cannot help but come face-to-face with this figure as you enter the space; this is where the story begins. The accompanying text identifies the figure as the activist Stormé DeLarverie (1920–2014), a woman of color and self-described “drag king” that the artist presents as the instigator of the Stonewall riots.

Three pedestals toward the center of the gallery hold a total of eight square crystal objects, serving as vases for a single red rose. Each bears an inscription, and with phrases such as “Queen Power Exploded With The Fury Of A Gay Atomic Bomb,” one can assume this represents accounts from the riot. The artist references glass as a material that conveys the body in flux: fluidity of gender, of identity. Othered bodies in a state of shock, crying out. A video installation features a virtual stained glass window, echoing the one in the xerox grid seen in the entry. The title of the video refers to the first newspaper article published after the riots, headlined “Homo Nest Raided – Queen Bees are Stinging Mad.” The glass mosaic is an apt metaphor for anecdotal history, the manner in which the narrative of this traumatic event was pieced together by assembling eyewitness accounts of the riot and its aftermath. History is in the telling.

Over the last year, our Oklahoma Art Writing & Curatorial Fellows have honed both their writing and curatorial skills through the Fellowship, which has culminated in this special issue of Art Focus Oklahoma and a Curatorial Lab at the Henry Zarrow Center for Art & Education in Tulsa. The first two exhibitions, Humanity is the Foundation and Stripes Around My Shoulders, open July 5, 2019 and two additional exhibitions; Pink: An Exploration, and REMIX: Cultural Collaboration, open on August 2, 2019. This special edition of Art Focus Oklahoma and these brilliant exhibitions mark the end of a year-long study and exploration of contemporary art criticism and curation. 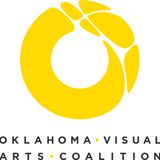