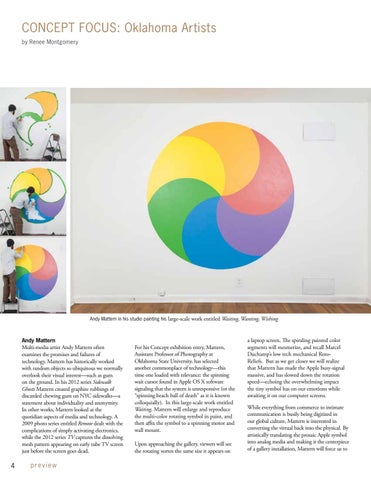 Multi-media artist Andy Mattern often examines the promises and failures of technology. Mattern has historically worked with random objects so ubiquitous we normally overlook their visual interest—such as gum on the ground. In his 2012 series Sidewalk Ghosts Mattern created graphite rubbings of discarded chewing gum on NYC sidewalks—a statement about individuality and anonymity. In other works, Mattern looked at the quotidian aspects of media and technology. A 2009 photo series entitled Remote dealt with the complications of simply activating electronics, while the 2012 series TV captures the dissolving mesh pattern appearing on early tube TV screen just before the screen goes dead.

For his Concept exhibition entry, Mattern, Assistant Professor of Photography at Oklahoma State University, has selected another commonplace of technology—this time one loaded with relevance: the spinning wait cursor found in Apple OS X software signaling that the system is unresponsive (or the “spinning beach ball of death” as it is known colloquially).  In this large-scale work entitled Waiting, Mattern will enlarge and reproduce the multi-color rotating symbol in paint, and then affix the symbol to a spinning motor and wall mount.  Upon approaching the gallery, viewers will see the rotating vortex the same size it appears on

a laptop screen. The spiraling painted color segments will mesmerize, and recall Marcel Duchamp’s low tech mechanical RotoReliefs. But as we get closer we will realize that Mattern has made the Apple busy-signal massive, and has slowed down the rotation speed—echoing the overwhelming impact the tiny symbol has on our emotions while awaiting it on our computer screens. While everything from commerce to intimate communication is busily being digitized in our global culture, Mattern is interested in converting the virtual back into the physical. By artistically translating the prosaic Apple symbol into analog media and making it the centerpiece of a gallery installation, Mattern will force us to