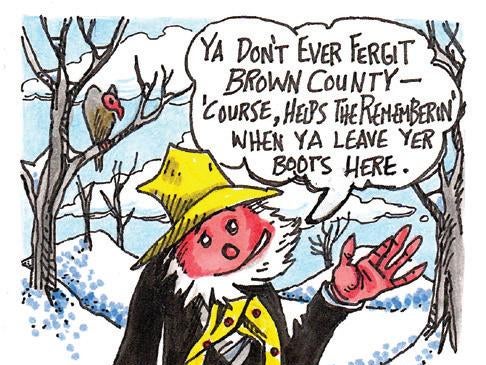 Back in Frank Hohenberger’s day, before the advent of digital photography, there was a thing called a “latent image”—a photograph had already been recorded on film, but had not yet been made visible by processing the film with chemicals in a darkroom.

In a way, Buzz King’s relationship with the famous Brown County photographer was like a latent image; at the time, as a child, he didn’t really see it. But in the intervening sixty or so years, his understanding and appreciation of the county’s most important chronicler has developed.

King grew up on West Franklin Street in Nashville, and Hohenberger occupied rooms two blocks east at the Bartley House, where he lived the last 20 years of his life.

As a child, he had been in Hohenberger’s darkroom, his workspace, but not regularly.

King discovered at an early age that he shared a birthday, January 4, with the celebrated photographer and newspaper columnist. “He spent his birthday at our house every year until the year he died,” King said. “He was always down at Christmas, and on both occasions, he always brought me a gift. At Christmas, it was usually a book, wrapped up in brown manila-type paper. On birthdays, he always brought me a pack of 20 of the little boxes of Chicklets—that was his favorite.”

Hohenberger was working at a photography store in Indianapolis when he saw some pictures that someone had brought in to be developed and he asked, “Where is this?” He made several trips to Brown County, eventually moving here in 1917. Even though he travelled quite a bit and even tried living other places, he could never break away from his fascination with this place and its people.

“He did more than any single person to make Brown County popular, throughout the whole nation, actually,” King said. “He wrote articles and his photos and pamphlets and papers—all kinds of good stuff. Photography wasn’t his only thing, he was a printer, too. He printed Christmas Cards for people every year, he printed little booklets. His press was small and printed things one at a time. He could print about a five-inch paper. For a couple of years, he published a little one-or-two-page thing called the Nashville Observer. Quite a few people subscribed to it.”

Hohenberger had apprenticed as a printer at 13, and spent most of his next 30 years as a printer in various shops throughout the Midwest, eventually, at the Indianapolis Star.

“My Uncle Rex and my dad did things for Frank. They helped him,” King said. “Dad drove him places so he could take pictures. Frank could drive, but he never liked it. He wasn’t much of a driver.” He said one time Hohenberger was coming down Miller’s Hill too fast and tried to turn the corner too quickly and rolled his Model T over on its top. “He got out and just got up and walked away.”

Because of their close relationship, Buzz’s father Fred had the chance to watch the master photographer in action with the huge, wooden view camera which exposed 5X7 film sheets in a light-proof carrier that slid in and out of the camera.

The two friends would just sit and talk, and once in a while Frank would look up. They would talk some more, and at some point, he would get up, focus, slide in a film carrier, take a picture, turn it over, take another picture. Then he’d say, “Let’s go.”

“He waited for the sun to be in the exact right spot to make the picture better. He was really a master at that. He only took a few color photographs, and that was late in his life. He liked the black and white.”

Hohenberger not only rubbed elbows with the famous and celebrated—he photographed Eleanor Roosevelt at the door of the Brown County Art Guild and hobnobbed with Ernie Pyle when he was here— he was also friends with a lot of local notables.

“He was great friends with Andy Rogers and his dad before him,” King said. “They got along famously. He was friends with a lot of people. He had a fabulous friendship with Pods Miller, who ran the drug store just about a block up the street from where Frank lived. He was a very friendly guy, very pleasant.”

He personally knew big national names like George Eastman and Thomas Edison. He had their phone numbers in his book.

He was a friend and correspondent of famed artist T.C. Steele and a friend of legendary Indiana University Chancellor Herman B Wells. Wells saw that Hohengerger’s huge collection of historical photographs came to reside at the university’s Lilly Library—some available to view online.

“I wish we had been closer, I really do. I saw him, but I did not hang out with him. I’m not sure he wanted me to. I was little.” King said. “We regret things we didn’t do….That’s part of being people.

“When I was 10 or 12, Carey Cloud invited me up to his studio to help make Cracker Jack toys,” King recalled. “And I turned him down. To this day, I wish I’d done that. But then, it was probably Saturday, I had a lot of things going on.”

You can gain an appreciation for Hohenberger’s early photographs of Brown County by visiting the new Hohenberger Bar at the Nashville House, or from a booth at the Hobnob Corner Restaurant, both at the intersection by the county courthouse.