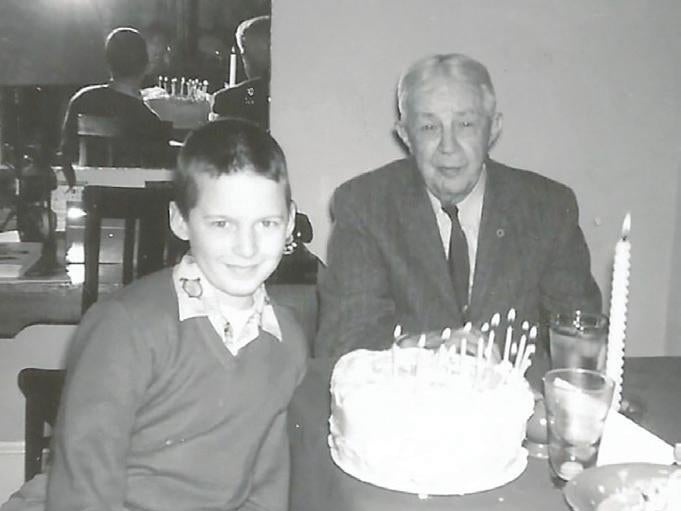 Buzz King Recalls Our Most Cel...
~story and photos by Bob Gustin

“When you handle an old textile, you learn a lot about how it was done…. A lot of handwork is logical. It’s lasted that long because someone thought it out. It’s logical and it made sense.”

Picture this: It’s 1861, and soon-to-be President Abraham Lincoln is making his way through rural Illinois in a horse-drawn buggy. He’s headed to Springfield, Illinois, where he’ll catch a train to Washington, D.C.

In some little settlement along the way, ladies of the town come out to greet him, and present a handspun, handwoven 34-star American flag to him. (Kansas was

admitted to the union earlier that year.) But it’s a rough road, and Honest Abe folds the flag and sits on it to cushion the ride.

Sarah Noggle knows it’s possible that story may not be true.

But it’s the story that was told to Lincoln College officials in Lincoln, Illinois, when they accepted the old flag for their collection, though the 34-star flag was not officially adopted until July 4 of that year. It was, in any case, the flag of the Lincoln presidency, whether he actually sat on it or not. No other president served while the 34-star flag was flown.

That flag was one of the projects Sarah took on as a textile conservator, making repairs so that it can be properly displayed.

In the world of historic textiles, there are three levels: preservation, which seeks to prevent further damage to a piece of cloth; conservation, which makes repairs necessary to make the piece visually appealing; and restoration, restoring the piece to as close as possible to its original condition.

Sarah, a Brown County weaver and textile artist, has worked for 14 years as a fabric conservationist for museums, universities, and public and private collections.

She has conserved Civil War flags, old quilts, stage curtains designed by architect Frank Lloyd Wright for Taliesin East, and many other textiles. One job was preserving inaugural gowns from the 1880s worn by the wives of Arkansas governors. She also worked on a series of tapestries woven in Europe in the 1700s honoring Phaeton, a figure in Greek mythology. “Every piece has its own story,” she said. While working on one tapestry, she realized the wool in it probably came from sheep overlooking a medieval village, and it was likely woven by candlelight. And when working to conserve Civil War flags, she would look up the regiments which carried them.

“We can’t pass by what history can teach us,” she said. “It repeats itself, sadly at times.”

One quilt she was working on recently is of handspun wool, colored using natural dyes. It was made in Indiana in the 1830s and currently in a private collection. To conserve it, she has found cloth that is a close match, and uses root from the madder plant as a natural dye. Madder has been used since ancient times as a dye, and would have been available in 1830s Indiana. Her efforts were rewarded with dyed fabric which is an almost exact color match to the old quilt.

Sarah has lived in Brown County for 42 years. Born in northern Indiana to a pair of teachers, she lived in various locations around the state, including Nashville, before moving to New Mexico, where she lived seven years, marrying David, a builder, and opening a bakery.

“I always wanted to be here in Brown County again, even as a sad nine-year-old who had to move away,” she said.

“Textiles happened when I moved back here and was looking for something to do with my hands.”

She took a spinning class at Yarns Unlimited in Bloomington, which led to weaving and knitting and working at the store for 23 years. Suzanne Halvorson, who owned the store, introduced her to Harold Mailand, a textile conservator in Indianapolis. Soon, Harold and Sarah were working together in the textile conservation business.

But that is only one part of her weaving business. From her studio on Clay Lick Road, she weaves dishtowels and other creations, and has been a member of the Back Roads of Brown County Studio Tour in October, cancelled this year because of the coronavirus. Because of the cancellation, she has a stock of about 75 dishtowels on hand, as well as whimsical creatures made on wire bodies using the thrums, or leftover parts of her weavings.

Sarah and David have four children: daughters Chelsea, Sarabeth, and Leslie, and son Teddy. All are artists, she said, mixing common sense with an artistic ability.

Sarah’s conservation work not only keeps historic pieces in good condition so that young people can learn from them, also they become a learning tool for Sarah.

“When you handle an old textile, you learn a lot about how it was done. It’s a lot of fun finding a new technique that’s been long gone because it’s handwork.

“A lot of handwork is logical. It’s lasted that long because someone thought it out. It’s logical and it made sense.”