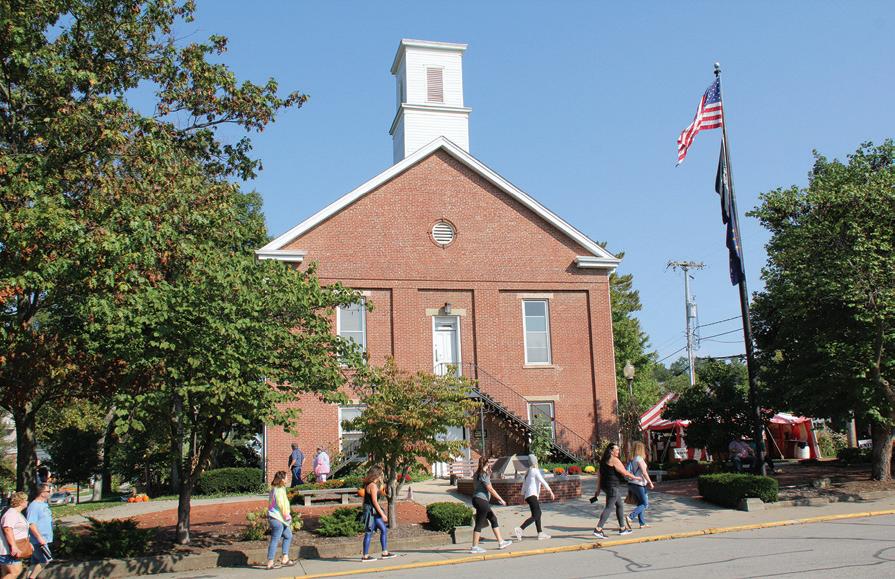 Courthouse History
~by Paige Langenderfer (and photo above)

Did you know that until the 1940s, an essential source of water for the town of Nashville was a solitary well located at the corner of Jefferson and Main streets?

In fact, when water became more widely available, the townspeople took the handle off of the well pump and held a funeral procession and burial service for the artifact.

That is just one of the quirky and interesting facts narrated by the driver on the Nashville Express. The train has been carrying passengers through Nashville for nearly 50 years, and offers guests a 20-minute scenic tour of the village shops, eateries, and mustsee attractions.

Boarding for the train is located right outside of Fearrin’s Ice Cream at the corner of Franklin and Van Buren streets. The cost is $7 per person (cash only) and children 5 and under are free.

The train runs six days a week (closed Mondays) from May through November. The route includes stops at the Seasons Lodge, the Brown County Inn, the Comfort Inn, and the Salt Creek Inn and is a great transportation option to and from the village for overnight guests.

Train drivers Tom Preston and Art Fletcher give their unique spin on each tour of the village.

“It’s the same history, but each driver has a little different script,” said Tom who has been driving the train for four years.

“I enjoy it because it is our history. I also love the people. I get such a diverse group of people from all ages. Everyone seems excited to ride on the train and that really makes my day.”

The train takes off from each stop with the ding of a bell, which is often followed by a joke.

“How do you catch a unique rabbit? You unique up on it of course.”

“That is where all of our hard rockers hang out. But, if we add cushions, it becomes soft rock.”

Brad Cox, who now owns the train with his wife Stephanie, first rode the train as a young boy.

“Everyone has their own story with the train,” Brad said. “My dad brought me to Nashville when I was a little boy and I loved riding the train.”

Larry Hawkins, former co-owner, approached Brad and encouraged him to buy it.

“Dad had asked me several times over the years to buy the train and I just wasn’t interested,” Brad said. “But it is such a major part of this town that it had to continue.”

Brad said he is proud to continue the legacy of the Nashville Express.

In the early 1970s, Larry Hawkins asked local mechanic Bob Austin if he could make a train on wheels. Bob had a reputation of welding different parts of equipment together to make them work better. He tackled Larry’s challenge by stripping down an old Chevy truck and welding various pieces of metal into a vehicle resembling a train.

The Nashville Express was a hit with the tourists from the beginning. Now there are two trains—a soft top, and a hard top—powered by six cylinder engines.

“The train helps this town,” said Brad. “We point out the restrooms and the businesses. We give people the lay of the land and encourage them to visit something they’ve never been to before.

“Everyone loves the train. One day we had three generations of one family riding the train. The grandma was so excited to introduce the train to her granddaughter.

“I can’t say how much I appreciate our drivers and advertisers,” Brad said. “And my wife Stephanie keeps it all together. I couldn’t do it without her.”

Occasionally, Brad fills in as a substitute driver on the train and said on each tour he always includes one of his dad’s favorite jokes:

“Last night I dreamed I was a muffler. I woke up totally exhausted.”