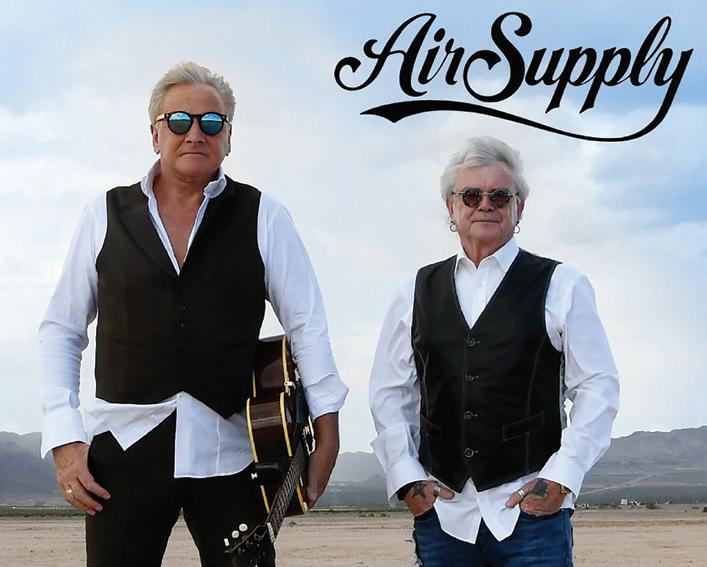 Air Supply at Music Center
~by Mark Blackwell
“If you want a thing done well, do it yourself.” —Napoleon Bonaparte

This near debacle started out of a sense of duty to the great deity of suburban landscaping, or at least my neighbors. The lawn was in dire need of mowing and it was up to me to mow it.

It was a beautiful morning, moderate temperature and low humidity, breaking a fairly long heat spell. A heat spell that I had been exploiting as an excuse not to mow the yard. But with that excuse evaporating with the morning dew, I sat drinking my morning coffee and plotting the day’s landscaping offensive. Little did I suspect that fate was also making plans.

Face washed, coffee drunk, sunscreen applied, I marched out to the shed to fire up the old John Deere. I jumped in the seat and turned the key. With a mighty growl the engine caught. I put the tractor in reverse and as soon as I cleared the shed door I noticed that the right front tire was flat.

Well, I grew up in the country, in an age where if it was at all possible (and sometimes even when it wasn’t) a man was expected to fix what ever needed fixin’ (weather and relationships excepted).

It’s just a simple flat tire, I thought. I could just inflate it and be on my way but on closer examination the tire wasn’t a simple flat, it was seriously flat, I mean, bad, nasty flat. It was the kind of flat that is not content with close contact with the ground, but is actively trying to burrow down into it. I was going to have to jack the mower up.

After a diligent search of a couple of out buildings, I found my Grandpa’s old Model T Ford car jack. I placed it under the axle and started cranking the handle and watched with no small amount of amazement as the wheel lifted off the ground.

I wasn’t amazed that the wheel lifted, I was amazed that a simple tool fabricated in Detroit, Michigan, in the early 20th Century by men now gone, and left to me by another man now gone, was helping me do a job, here in the 21st Century.

That was okay, though, because I knew that somewhere on the premises I had a spare inner tube that I could swap out. How hard could that be? I was to find out.

Finding the inner tube was the easy part. Installing it was a little more difficult. At first, I imagined that I could just pop the seal where the tire and wheel met, slide out the old tube, slide in the new tube, pump it up and Bob’s yer uncle (whatever that means). But that isn’t what happened. The wheel was not inclined to give up the tire or the inner tube without a fight.

I reckoned that I could hold my own in a regular kind of dust-up but I was not prepared for the WWE style smackdown that it turned into.

I got the wheel off the axle with only minor scrapes and contusions but when I got it on the ground, the real struggle commenced. I knelt on the tire to try to make an opening between the wheel and the tire but realized I had no way to pry the tire off. Not being a professional tire wrangler and thus not owning any tire wrangling tools, I had to improvise. So, I found a couple of screw drivers and a mallet to even the odds and rejoined the fray.

It was about three hours later that I finally declared victory. The new inner-tube was installed and inflated, the wheel was re-mounted and the bearings packed with grease. Then I trepidatiously lowered the jack. Everything looked good; no leftover parts. I was ready to wash up and celebrate with a big mug of ice tea. It was then that my phone rang.

I was exhausted but in a reasonably good mood when I answered the phone. The voice that greeted me was one of my oldest friends inviting me to meet him at one of our favorite watering holes for a beer.

Too pooped from my labors to actually do any mowing, I accepted the invite.

I should mention that I greatly admire my friend for his talent, skills, and resourcefulness. I have never seen him back away from any situation from rehabbing houses to rebuilding car engines. So, I was looking forward to regaling him with my story about my victory over the lawn tractor.

When I finished my tale, I sat back waiting for some sign of manly approval. He looked me square in the eye and said, “Oh, I never do that. that’s way too hard. I take my tires over to the tire store and have them fix it.”

So, if you find yourself in a DIY state of mind, Brown County is a great place to practice self reliance.