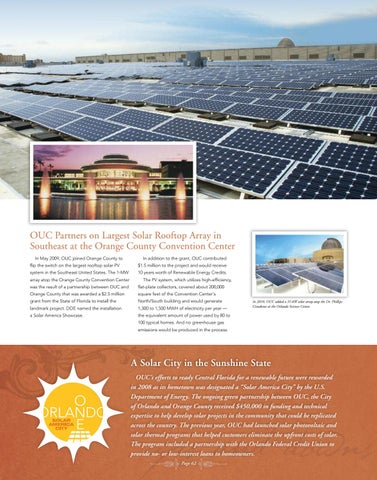 Green Neighborhood Program In 2010, OUC partnered with the City of

of high energy consumption, thanks to

Orlando on the Green Neighborhood Program,

funding from OUC and the federal stimulus

a weatherization fix-up program that targeted

funds the City received in the form of an Energy

homes in some of the City’s least energy-efficient

neighborhoods. Based on historical consumption

Participants in the Green Neighborhood Program

data from OUC, the City developed an energy

received an energy and water audit from OUC

intensity map to identify the neighborhoods with

followed by a complimentary package of electric

and water conservation measures valued up

The Green Neighborhood Program was

In 2010, the Green Neighborhood Program: Implemented more than $700,000 in conservation measures for a total annual energy savings of more than 1.3 million kWh in more than 1,000 homes in the City of Orlando.

provided free to neighborhoods with a history

New Power Partnerships: OUC Sells Electricity to Vero Beach and Bartow Power plants take years to permit and construct and are built with growth in mind. Utilities forecast their generation requirements and supplement

OUC Partners on Largest Solar Rooftop Array in Southeast at the Orange County Convention Center In May 2009, OUC joined Orange County to

In addition to the grant, OUC contributed

flip the switch on the largest rooftop solar PV

$1.5 million to the project and would receive

system in the Southeast United States. The 1-MW

10 years worth of Renewable Energy Credits.

of power over a definite period of time as the

future energy requirements above the City’s

utility grows into its load requirements.

their electricity needs by selling blocks of

power provider for the City of Vero Beach —

generation to other municipalities or utilities

providing about 100 MW of electricity to the

OUC would provide wholesale power to the City

through power purchase agreements. Such power

beachfront community for a period of 20 years.

beginning January 1, 2011; Bartow would then

partnerships with other municipalities have been an

distribute it through its existing infrastructure

The PV system, which utilizes high-efficiency,

was the result of a partnership between OUC and

Orange County that was awarded a $2.5 million

square feet of the Convention Center’s

grant from the State of Florida to install the

North/South building and would generate

the equivalent amount of power used by 80 to

OUR COMMITMENT TO FUTURE GENERATIONS

In 2010, OUC added a 31-kW solar array atop the Dr. Phillips Cinedome at the Orlando Science Center.

100 typical homes. And no greenhouse gas emissions would be produced in the process.

A Solar City in the Sunshine State OUC’s efforts to ready Central Florida for a renewable future were rewarded in 2008 as its hometown was designated a “Solar America City” by the U.S. Department of Energy. The ongoing green partnership between OUC, the City of Orlando and Orange County received $450,000 in funding and technical expertise to help develop solar projects in the community that could be replicated across the country. The previous year, OUC had launched solar photovoltaic and solar thermal programs that helped customers eliminate the upfront costs of solar. The program included a partnership with the Orlando Federal Credit Union to provide no- or low-interest loans to homeowners. Page 62

At the close of the first decade of the new millennium, OUC remained committed to building upon the strong foundation it had established over the past 87 years. Through it all, one thing has been constant — the employees of OUC continue to provide the highest level of reliability at affordable rates while acting as good stewards of the environment.